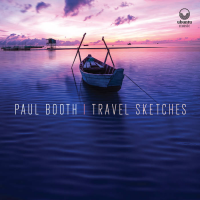 The intense media interest surrounding the rise of the British woke jazz movement is welcome, but it is increasingly monopolising local bandwidth. Great British jazz which adheres more closely to the founding American tradition is becoming sidelined. Babies and bathwater come to mind.

One of the few British labels looking at the 360-degree picture is Ubuntu Music, on which tenor saxophonist Paul Booth's Travel Sketches is released. Ubuntu—the label's name is taken from the Southern African word meaning "I am because we are"—shifted into top gear in 2017 and only two years later has three dozen albums either out or scheduled. These include such high-carat items as: Inspiration (2018), harpist Alina Bzehezhinska's spiritual-jazz debut; Isang (2016) and The People Could Fly (2018), deep woke-jazz from alto saxophonist Camilla George (of whom Dee Dee Bridgewater said after appearing in concert with her, "the world is safe because we have Camilla"); and Kavuma (2018) and The Banger Factory (2019), present-tense hard-bop heaven from trumpeter Mark Kavuma. Tip in a couple of previously unavailable live recordings made of Chet Baker in London in 1983, and you are getting an idea of Ubuntu's well rounded catalogue.

Also to its credit, Ubuntu proclaims its principles on its sleeve—or at least at the top of its website's January 2019 Year End Review. The page calls out the "chaos" spawned by "Trump and Brexit" and celebrates releasing albums from a wide demographic of artists: "male and female; young, old and deceased; beautifully diverse in terms of race, creed, ethnicity, colour and nationality."

And so we arrive at Booth's album. It was recorded in a live setting, mostly in one take, by his classically configured, acoustic quartet. It would be simplistic, and doing Booth's individuality an injustice, to say he further rounds out the Ubuntu catalogue by bringing Stan Getz to the party. But Getz fans will find much to enjoy in Travel Sketches. It is lyrical and intimate and muscular. Like Getz's music, it is balm for the soul.

So, too, is the big-band music Booth makes with the Bansangu Orchestra, which he co-founded. Bansangu is approximately in the mold of London's pioneering Grand Union Orchestra (with which several of its members play) and, like GUO, it brings together many diverse musical influences, from Brazilian, African, Caribbean, South Asian and Middle Eastern cultures. The band's sole album to date, Bansangu Orchestra (Pathway, 2018), is recommended.

Booth spends much of his time touring the world with big-ticket acts such as Steely Dan, Eric Clapton, Carlos Santana, Van Morrison and Steve Winwood (with whom he's worked for thirteen years). But his roots are in acoustic jazz. The seven originals on the eight-track Travel Sketches were mostly written during off-stage moments on the road, those precious, private snatches of time when an itinerant musician is able to forget about living out of a suitcase, getting jetlagged and being in the public eye on high-decibel stages. An air of wistfulness pervades the album. It could equally well have taken its title from track four, "No Place Like Home."