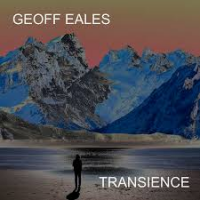 Transience is Welsh pianist/composer Geoffrey Eales' thirteenth release dating back to 1999. All of the words and music are by Eales, and he has taken this opportunity to express in music his feelings about how ephemeral human existence is in general, but also specifically of the passing within the past year of his mother, as well as that of pianist John Taylor and trumpeter Kenny Wheeler.

Naturally, the music is highly emotional, but is never cloying or melodramatic. There is also an overt nod to the group Azimuth, comprised of Taylor, Wheeler and vocalist Norma Winstone on a number of the tracks. While the band is a quintet, the bass and drums support the Azimuth instrumentation via Eales, trumpeter Noel Langley and vocalist Brigitte Beraha.

Although the sound of this trio comes remarkably close at times to that of Azimuth, (indeed, there are quite a few spots which could mistaken for an ECM record—but this is a compliment), it is quite clear that the effort is one in honor of those performers and not one of crass imitation. Langley and Beraha are magnificent throughout, as are bassist Chris Laurence and drummer Martin France, and of course Eales himself.

The album has a very strong internal consistency which produces a flow from piece to piece as the pacing carries one along. There are moments of somber introspection as well as knowing acceptance, along with those joy and exhuberance. This is music, which in its nature is abstract, that has a deeply human component which actively reaches out to the listener. The feeling is uncanny and not a little unnerving, but which resolves into a very satisfying and personal performance. In the end, we really know who Eales is and how he views the world.

The mood is set up by the opening track, "Sleep Eternal," which is a beautiful group improvisation that introduces the sounds of Langley and Beraha. "Life Dance" which follows is based on the odd meters that characterize the folk music of Eastern Europe, and which celebrates existence. Beraha's voice floats high above the band in the opening of "Atonement" and blends perfectly with Langley's horn in this beautiful, slow piece.

"Translucence" is a short solo improvisation by Eales that stops time with its gorgeous harmonies, while Langley and Beraha once again closely mesh on the dramatic opening of "We All Must Change." Placed at the center of the album, "Quirk Of Fate" provides a bit of release with its bluesy swing, but "Gently Into The Night" returns to the main mood of the optimistic acceptance of our human existence.

The longest track is "Remembering Kenny," a direct outpouring of everything Eales felt about Wheeler over the years, but especially after the October 31, 2014 memorial service for him at St. James Church in Paddington, England. Langley is again wonderful as he plays through this multi-sectional piece (somewhat of a Wheeler trademark) with its different moods.

Transcience is a masterpiece in its own low-key way. Eales should be congratulated and ought to receive much deserved recognition for this deeply moving music. Bravo!

Sleep Eternal; Life Dance; Atonement; Translucence; We All Must Change; Quirk Of Fate; Gently Into The Night; The Dark Glass; If Only...; Nocturne; Remembering Kenny; Celestial Vision.