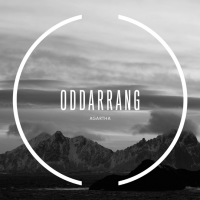 Agartha is the fourth studio album by Finnish quintet Oddarrang and their second for the UK label Edition Records. The band is led by eclectic musician and drummer, Olavi Louhivuori.

The album's title takes its name from the legendary world that is said to reside in the Earth's core, and Miles Davis's similarly named album Agharta also derives from this mythological entity.

"Altheia" starts with spacey low droning synthesizers, evoking shades of early-ish Pink Floyd but the mood is suddenly lightened by fast flowing streams of higher register keyboard notes and a dramatic backdrop of choir-like harmonies evolving into a cacophonic melee of sound.

Slow to take off, but when it does the anthemic "Central Sun" verges on, if not exactly heavy rock, then certainly heavy prog, and is enhanced by wordless voices and gutsy trombone and a central labrynthine theme. Louhivuori's metally-edged drums here become the focal point of the piece.

By sharp contrast to the preceding track, the lugubrious first part of "Mass I-II" is dominated by doleful cello. The second part sees guitars and cello interplay with synthesizers, building-up to the final section with flailing drums and resonant bass leading to a climactic crescendo.

After a taciturn beginning, "Admiral Byrd's Flight," transmutes into a showpiece benefitting from a dramatic and memorable riff augmented by haunting vocals, and all ultimately overtaken by synthesizer effects.

The tranquil "Telos" is swathed in rich trombone and cello, an unusual but enlightened instrumental combination. A short bridge of synthesizers leads into the rock-infused title track, dominated by an ostinato bass riff, overlaid guitars, swirling synths, cello, trombone and voices, culminating in an almost liturgical-sounding ending. Oddarrang doesn't sound like any other band nor does it fit into any particular musical bag, but the music produced is extraordinary. No dragged-out ego-drenched solos here, just a band playing as one complete and harmonious unit.