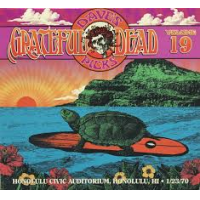 Grateful Dead archivist David Lemieux has done yeoman's work to distinguish his archival series of recordings from that of his esteemed predecessor Dick Latvala and Vol. 19 is no exception . But this edition of Dave's Picks, from Honolulu, Hawaii in January of 1970, has much in common with a release from Dick's Picks, while simultaneously setting itself apart from those which preceded it (except for the fact it too sold through its limited run).

The most significant trait of all is the fact that the bulk of two shows are contained on these three CD's rather than the usual single complete performance. And while it only stands to reason there would be readily discernible continuity given the two shows at the Civic Auditorium took place on consecutive nights (both recorded by group mentor & audio savant Owsley Stanley), the transition in which the Grateful Dead found themselves at this juncture of their career puts these performances in an unusual perspective.

The matter-of-fact writing of Lemieux in his essay in the enclosed booklet that clearly delineates the transformation the iconic band was undergoing as the Sixties turned to the Seventies. Moving steadily and markedly away from the wild psychedelicism of tunes prominent here in the form of "That's It for the Other One," "Dark Star" and "St. Stephen" -not coincidentally, placed in close proximity to each other in the virtual center of this packages twenty-three tracks-the Dead had been writing and were about to begin recording more succinct compositions such as "Black Peter" and "Dire Wolf," featuring elements of folk and country music that lent themselves to more economical arrangements and playing.

The first of two pivotal albums in this style, Workingman's Dead (Warner Bros., 1970) would not appear until May of this year (and the second, American Beauty (Warner Bros., 1970), not til six months later, but as of the time of these shows, which, as Lemieux so observantly points out, inaugurated an elongated trek of touring (to hone their newly discipline chops perhaps?), the band was incorporating more and more of such material into the repertoire, the eventual extension of which was the conception of multi-set shows featuring wholly acoustic segments.

Within that format, group harmonies, not heretofore this band's strong suit, were a crucial component. And what is most remarkable is that the Grateful Dead sacrificed little if anything in this fundamental shift: the polished singing did not detract from their improvisations any more than the new compositions and, in fact, "Casey Jones" and "Mason's Children" (a tune left off the first of the studio albums to come later this same year) fostered more focused jamming inside and outside the structure of these numbers themselves.

And the inclusion of such material didn't appreciably reduce Ron "Pigpen" McKernan's time in the spotlight either: still in his prime (and about to return to organ with the imminent departure of keyboardist Tom Constanten), the vocalist/ harpist put himself, the band and the audience through a workout during the likes of "Hard to Handle," "Good Lovin,'" a rare "I'm A King Bee" and especially "Turn On Your Lovelight," at thirty-eight(!) plus minutes

As the eminently qualified author of the aforementioned essay implies ever so strongly in his account of the iconic band's metamorphosis, the Grateful Dead were never more versatile than at this point of their career, equally conversant in the respective approaches of the psychedelic warriors, genteel nouveau folkies and uproarious dance band. Still, the most provocative intimation David Lemieux offers in his notes relates to a plethora of recordings, similar to Dave's Picks Vol. 19, yet to be released.

He leaves the reader/listener/collector with a palpable suspense with by not specifying if future such issues will take the form of additions to his own list (adorned with similarly evocative stage photos plus a comparably humorous image like this one's with a turtle on a surfboard) or one of the mammoth sets by which he's not only distinguished himself, but the ever-growing legacy of this iconic band.