BY MATTHEW AQUILINE
July 12, 2016
Sign in to view read count 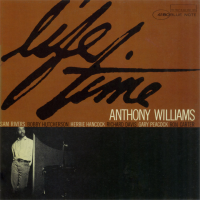 By now, it's an irrefutable fact that drummer Tony Williams was the youngest preeminent figure within the avant-garde movement of the mid-'60s. Every jazz fan seems to know the events that led to his international fame: after intriguing trumpeter Miles Davis with his cutting-edge approach to drumming, he was hired and added to the groundbreaking "Second Great Quintet" at the ripe age of 17. During this significant stint, Williams altered the trajectory of Davis' music, solidified himself as a drum wunderkind, and broadened his skill set to successfully branch out from jazz into rock-oriented genres such as fusion.

The details above have already been fossilized in jazz history, but what about his lesser-known early years, before breaking tradition with Miles Davis?

After a partnership with Sam Rivers at age 13, Williams was hired by Jackie McLean at age 16 and eventually recorded on his 1963 album One Step Beyond (Blue Note, 1963)—an adventurous effort that firmly established Williams as a sought-after session drummer for Blue Note Records. As word of his virtuosity spread, Williams eventually landed sessions with some of the leading musicians in post-bop and the avant-garde whose albums have since reached legendary status. Williams left an indelible mark on Eric Dolphy's Out to Lunch! (Blue Note, 1964), Andrew Hill's Point of Departure (Blue Note, 1964), and Sam Rivers' Fuchsia Swing Song (Blue Note, 1964) to name a few.

As Williams continued to reinvent what the drummer's role was in jazz, Blue Note founder Alfred Lion—a champion for documenting new and innovative music, even if it didn't sell—offered him his own recording dates, which were then collected for the release of his 1964 debut studio album, Life Time. To fully comprehend the grasp that Williams had over jazz at the time, he was only 18 and managed to conjure a lineup that included Sam Rivers (tenor saxophone), Herbie Hancock (piano), Bobby Hutcherson (vibes, marimba), and three bassists: Ron Carter, Richard Davis, and Gary Peacock. Along with leading a post-bop dream team, all of the compositions on the album were penned by Williams himself.

To state the truth, Williams' second effort for Blue Note, Spring (Blue Note, 1965), often overshadows Life Time in part due to its accessibility and firm roots in structured post-bop. That's not to say that Life Time lacks musical vision, in fact, the album itself is an overlooked classic that boasts a sense of adventure and space that's absent on Spring. The music on Life Time is always moving, surveying every facet of each composition, extracting colors, emotions, and vibrations; it's unfettered from the claws of tradition and, when played from start to end, galvanizes the listener's imagination.

The album begins with the side-long, two-part composition "Two Pieces of One." The first part, "Red," begins with a tenor saxophone and bowed bass intertwining to produce a somber melody on top of Williams' spastically brushed snare. Launching off of an extended bass solo, Rivers and Williams wallow in compelling interplay with no particular direction before letting Davis and Peacock duet for the rest of the song. "Green" picks back up with brisk, vibrant runs by Rivers over Williams' dynamic ride cymbal patterns. Increasing in energy, Rivers flirts with overblown notes before easing up to let Williams illustrate his expressive, unpredictable approach to the skins.

Williams, Rivers, and Peacock combine for "Tomorrow Afternoon" which echoes the imaginative improvisation found on the previous, but becomes looser and more uninhibited as it progresses. Perhaps the most notable detail of this song is the interaction between Peacock and Rivers. Peacock, who harbors a lyrical approach to the bass, bounces angular sets of notes off of Rivers who then repeats them, contributing to a constantly evolving cycle of fresh ideas.

"Memory" marks the album's first appearance of Hutcherson and Hancock. The most percussive track on the record, Williams plays his usual kit along with timpani, wood blocks, maracas, and triangle. Hancock plays in the shadow, setting an overarching moody tone with dark, sporadic chord sequences. Hutcherson, playing vibraphone and marimba, embellishes Williams' primitive instrumentation, performing with the utmost zeal and inventiveness.

Williams, being the mature musician he was, stepped out of the spotlight and allowed Hancock and Carter to perform a piano/bass duet for the last composition. A song as enchanting as its title, "Barb's Song to the Wizard" is saturated with whimsical interplay and musical subtleties. Apart from the stunning performance, this song is a fine testament to Williams' underrated compositional prowess.

In retrospect, it's easy to see why Williams' accomplishments in the field of fusion often conceal his earlier organic efforts; the boisterous music of the '70s is undeniably more popular than the experimental ideals of avant-garde jazz. Nonetheless, this music deserves to be recognized and enjoyed. Constantly brimming with spirit, Life Time is an enthralling debut from a young trailblazer.