By Ian Patterson
September 30, 2022
Sign in to view read count 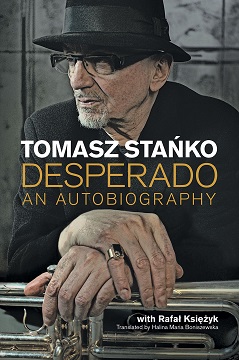 Polish trumpeter Tomasz Stańko packed a lot into his 76 years before succumbing to lung cancer in 2018. A lot of music, most of it of lasting value, and a lot of living. In fact, given his numerous substance addictions, it is a wonder that he was quite so prolific, and that he lived as long as he did. Originally published in Polish in 2010, the first English translation of Desperado... is not a conventional biography but rather an extended conversation between Stańko and Polish journalist and author Rafał Księżyk, culled from interviews conducted between July 2008 and May 2009.

Bar the final years, every stage of Stańko's life and varied career is analyzed, fueled by Księżyk's meticulous research. Had the author not followed a path in journalism, a career in forensic science might have been tailor-made for one who sees how the mass of details, (Stańko's pixels, if you will) when connected, contribute to the greater picture.

The narrative, roughly chronological, is driven by the author's probing questions and his voracious curiosity. His relentless and exhaustive approach stimulates Stańko, whose open, expansive engagement results in a dialogue that is probably more revealing of its subject, and certainly more direct, than a more literary, ghost-written biography might have been.

Like many great artists, Stańko emerges as a man of contradictions: a loner with a herd mentality; fiercely creative and equally self-destructive; a purveyor of beautifully simple melodies yet a beacon of European free jazz; a melancholic and an optimist; an outlier figure courted by Polish mainstream media.

Księżyk invites Stańko to peel back the layers on each of the musical stations along his journey, beginning with his initial encounter with the trumpet as a boy in 1950s Krakow, through his first professional forays in the groups of Michal Urbaniak, Andrzej Trzaskowski and Krzysztof Komeda, to his own celebrated Polish and American small ensembles.

Stańko's collaboration with Komeda lasted from 1963 to 1967, crowned by the recording Astigmatic (Muza, 1966), but the much-mythologized pianist/composer would make a life-long impression on Stańko, who played his compositions until the end: "Komeda had a Mozartian lightness... It was beautiful, joyous and so human," Stańko enthuses.

Księżyk prods and pursues Stańko on a vast array of subjects, philosophical, existential and earthy, much of which might have seemed superfluous to a conventional biographer. But Stańko, while clearly a person of intellectual depth, is at his most engaging when offering insights into his creative stimuli and processes. He shares his thoughts on improvisation and the artwork, poetry, women and music that touched his soul and found expression in his writing and playing.

He is no less forthright about his sometimes anarchic, self-destructive behavior, describing himself as a "schizoid type with a certain kind of split personality."

He is not kidding. Before he cleaned himself up in the 1990s, Stańko comes across as a madder version of Charles Bukowski. Alcoholic benders would last for weeks. Cocktails of, variously, weed, amphetamine, cocaine and heroin were long the norm. This contributed to some notably erratic behavior, such as the time when, "carrying a spear," he deliberately stepped out in front of the traffic for the hell of it, causing a multiple-car pile-up. "I used to carry meat cleavers with me," Stańko reveals, matter of factly.

Even during this most hedonistic period, Stańko was able to draw a distinction between his drug-fueled antics and his music-making. The former seems to have been driven by his peculiar sense of fun, a provocative nature that sought extremes. The latter was always a serious business. "My art goes its own way. The idea that if I light up a joint my art's going to be amazing has always struck me as absurd," he tells Księżyk.

Stańko's response to, and place within, the European free-jazz scene, the ECM years, his relationship with both Communist-era Poland and New York, his key recordings, projects and collaborations—all are covered in some detail. Colorful anecdotes, such as the high jinks surrounding his illegal recording session at the Taj Mahal in India, abound.

But Desperado... is less about incidents and more about Stańko's creative process and the architecture of a sound. "I had to have my own sound... " Stańko tells the author... "In tune with my soul, my inner being. I knew that the more modern music I played, the easier I would find it to create my own style."

Desperado... also dispels any notion that Stańko's success came without struggle. Despite his demons, he comes across as an incredibly resilient soul. "I've had to battle constantly with adversity. But, basically—I keep going. I keep going. I don't give up."

Brilliantly translated by Halina Maria Boniszewska—who did a similarly admirable job with Magdalena Grzebalkowska's Komeda: A Private Life in Jazz (Equinox Publishing, 2021)—Desperado... is an eye-opening portrait of Stańko the man and a revelatory insight into the drivers—emotional, intellectual and aesthetic—behind one of modern jazz's most enigmatic and influential figures.