Deerhoof and Wadada Leo Smith: To Be Surrounded By Beautiful, Curious, Breathing, Laughing Flesh Is Enough 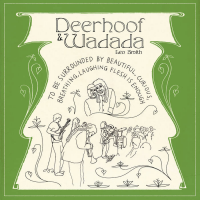 When it comes to combining the anarchic spirit of punk rock with whip-smart musicianship and a penchant for unbelievably catchy grooves, few bands come close to Deerhoof. Since the 1990s, the group has been cherished by indie rock cognoscenti, and they've also earned the respect of a large swath of the non-rock community as well, working with an astonishing range of artists, from Questlove to Matana Roberts to Anthony Braxton. And on their latest release, it's Wadada Leo Smith who serves as the guest of honor. The impossible-to-pigeonhole trumpeter has, in addition to creating Pulitzer-finalist artistry like Ten Freedom Summers (Cuneiform, 2012), been willing to collaborate with his own remarkable list of musicians, including Vijay Iyer, John Zorn, and Braxton, but in 2009 he joined Deerhoof during a concert in Los Angeles, and a kinship was established. So it wasn't in any way a shock for the two to team up again in 2018 at New York's Winter Jazzfest, where Smith played with the band for its last five songs. Now that concert is being released digitally by Joyful Noise Recordings, and with 100% of the proceeds going toward Black Lives Matter, there's an additional reason to sit up and take notice.

Although it's impossible to do justice to the trajectory of Deerhoof's evolution, perhaps the one generalization that can be made is a gradual (although by no means linear) gravitation toward more well-defined songcraft; the anything-goes deconstructionist mentality of their first several records, such as Reveille (Kill Rock Stars, 2002) and Apple O' (Kill Rock Stars, 2003) is still occasionally present on their more recent material, but the pop-oriented earworms are more abundant. With the exception of "Polly Bee," from 1997's The Man, the King, the Girl (Kill Rock Stars), the songs here are from the mid-2000s and afterward, the period in which Deerhoof was streamlining its approach in a much more listener-friendly direction. Keeping that in mind, one should remember that nothing Deerhoof does is ever exactly predictable or "mainstream."

The concert begins with "Believe E.S.P.," a funk-based track built around what has to be one of Deerhoof's most infectious riffs, and the band is clearly itching to provide the goods, with the twin-guitar crunch of Ed Rodriguez and John Dieterich bringing an especially tough rock-edged sound, one captured in perfect detail on the recording. Vocalist/bassist Satomi Matsuzaki's off-kilter, pitch-optional singing is always going to be an acquired taste, but this performance highlights her spirited warmth and disarmingly childlike qualities quite well—aspects that have always given the band a simple, life- affirming sensibility even in the midst of its most bizarre, schizophrenic moments. And Deerhoof just wouldn't be able to pull off its head-spinning meter changes and sustain its manic energy without drummer Greg Saunier, who is in top form. He somehow holds together "Mountain Moves," which is even more unhinged and rhythmically-skewed here than the version that featured Matana Roberts' alto saxophone on the band's 2017 Joyful Noise Recordings album of the same name.

But the real treat, of course, is hearing Smith join the performance midway through. "Snoopy Waves" has a loose-limbed funk rhythm that gives Smith a chance to get his bearings, before the much more acerbic "Breakup Songs" takes over, Smith's upper-register runs coalescing nicely with the band's aggressive bursts. The last three cuts may be even better, as Smith joins the guitars in dialogue on "Flower," despite the track's chaotic noise, and he really gets a chance to stretch out on "Last Fad," the concert's longest track at almost eight minutes. This one offers the best opportunity to appreciate the sophistication of Deerhoof's musicianship, as they gradually break the song apart, leaving enough space for Smith to develop his ideas while still maintaining the song's integrity and basic energy. The finale, "Mirror Monster," is almost as striking, with Smith leading the way over an enticing, open-ended groove, fully in sync with the band all the way to the end, with the trumpeter in a surprisingly poignant unaccompanied finish with Matsuzaki.

If there's a downside to the recording, it's that we only get to hear Smith on five of the cuts, as an entire album's collaboration would be even better. The musicians' synergy is undeniable. But that's what the repeat button is for.