By ANTHONY SHAW
November 24, 2019
Sign in to view read count 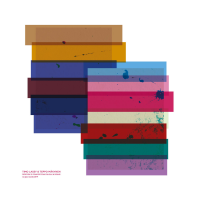 Timo Lassy and Teppo Mäkynen have been at the heart of the Helsinki jazz scene for over two decades, seeing international success with the Five Corners Quintet as well as leading several accomplished cutting-edge bands. This is something very different, an eponymously titled album where two established figures throw caution to the wind and cut loose together, creating an album of very varied interplay between just saxophone and drums.

Knowing how context can contort as well as conjoin, listening to the sparsity of their two instruments—both taken to the extremes of their sonic capabilities—the 13 short pieces manage to hold a tight focus. The simplicity of the themes leaves much space for sonic exploration which never loses sight of a common musical understanding.

Starting with the most sparse, "Fallow," later tracks like "Kobi" and "Nyanza" stand out, as the repetitive rhythmic hooks lead the simple untreated saxophone melody into places where it might not go normally. Mäkynen especially seems to have found a wealth of varieties in his palette, using tuned heads, peripheral rims and edges which build a rhythmic soundscape that Lassy reflects or rejects, sometimes with his own meandering rhythmic lines and, at others, with minimalistic, spartan leads, as on "Telemagenta."

This is an album where there is no pretension. Both players hold back from ornateness and rely on laconic, tight riffs which they share or hang out for their partner to embellish. Each piece is self-contained and shows modest development, but in their totality they add up to a highly articulate acoustic journey down some intriguing modern, often rock-based, ways. Like its multicolored but straightforward cover, this music is very simple but seductive.

About Timo Lassy and Teppo Mäkynen