By Dan McClenaghan
November 24, 2019
Sign in to view read count 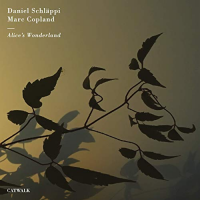 Alice's Wonderland is the third duo outing from bassist Daniel Schläppi and pianist Marc Copland, following Essentials (Catwalk, 2012) and More Essentials (Catwalk, 2015). Both Copland and Schlappi have carved out their spots as leaders of various sized ensembles, but the leaderless duo outing format seems to fit both instrumentalists well—Copland has teamed with bassist Gary Peacock on Insight (Pirouet Records, 2009) and What It Says (Sketch, 2004), pianist Bill Carrothers on No Choice (Minium Music, 2006), and saxophonist Dave Liebman on Bookends (hatOLOGY, 2002), in addition to his three pairings with Schappi.

Albums under Copland's name—especially in the solo or trio formats—fit into something of a pattern; an original or two from his own pen, some Great American Songbook tunes, perhaps something from Joni Mitchell, a pick from Miles Davis' Kind Of Blue (Columbia Records, 1959)—"All Blues" or "Blue In Green." When paired with Schläppi, the pattern remains the same, with an added a sprinkling of the bassist's originals. There are three here, all of them sounding as if they were written with Copland in mind, tinted perhaps with a touch more darkness than the more familiar offerings: ""Everything I Love" (Cole Porter), "Some Day My Prince Will Come," "Jade Visions" (Scott LaFaro).

Speaking of "Jade Visions," a tune that appeared on the Bill Evans' masterpiece, Sunday At The Village Vanguard (Riverside Records, 1961), appears here. Copland is often cited as possessing a style close to that of Evans, with his complex and heart-stoppingly beautiful harmonies, his delicacy of touch and a cool cerebralism. They treat the Scott LaFaro tune—LaFaro was the bassist on the previously-mentioned Evans album—with devotion, with Copland displaying the subtlest of touches, Schläppi dipping down to a minimalist (but muscular) mode.

"Some Day My Prince Will Come," a-mid 1960s favorite of the Miles Davis Quintets, plays out as a mood lightener, taken at a brisk pace, featuring some vivacious piano/bass interplay, while Cole Porter's "Everything I Love" exudes a lovely warmth, and the closer, "Blue In Green," from the Miles Davis Songbook, sounds like a peaceful prayer, as it always does in Copland's hands, to close out another excellent outing from Schläppi and Copland.

Everything I Love; Day and Night; The Other Way Round; Alice's Wonderland; Some Day My Prince Will Come; Juno; Jade Visions; All of Me; Blue in Green (Live).