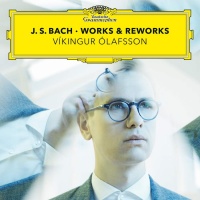 Icelandic pianist Víkingur Ólafsson has found himself soaked to the skin in accolades in 2019. It all began auspiciously enough with the pianist with Ólafsson beginning piano early, taught by his mother, a music teacher. Ólafsson eventually attended and matriculated from the Juilliard School in New York, with a Bachelor's and Master's degrees directed by Jerome Lowenthal and Robert McDonald. The pianist went on to blaze and international trial with concerts and recitals. He released three recordings on his own Dirrindí label: Debut (2009) featuring Brahms's 7 Fantasies Op. 11 and 16 Waltzes, and Beethoven's Eroica Variations. Ólafsson followed Debut with Chopin-Bach (2011), featuring Chopin's Preludes and two of Bach's Partitas. In 2012, Ólafsson released Schubert's Winterreise featuring Icelandic bass Kristinn Sigmundsson.

In 2016, Ólafsson signed an exclusive contract with Deutsche Grammophon. The next year he released Piano Works, a cool and informed reading of Philip Glass's Études with "Opening" from Glassworks. In 2018, Víkingur Ólafsson caught fire, releasing Johann Sebastian Bach, a collection of solo Bach and transcribed and rearranged keyboard performances. This was followed by the vinyl release of Bach Reworks, which concentrated on six remixed J.S.Bach compositions in collaboration with, Ben Frost, Peter Gregson, and Valgeir Sigurðsson.

Because of his DG recordings, Ólafsson has gone on to win the 2019 BBC Music Magazine's Album of the Year for JSB and was named 2019 Artist of the Year by Gramophone Magazine. Celebrating these awards, Deutsche Grammophon wisely re-released Johann Sebastian Bach and Bach Reworks in a single deluxe packaging, the subject this present review. I am thinking that Bach's keyboard music, particularly as played on the modern piano, is reinvented every decade or so by some classical firebrand making their mark. In the 2000s, it was Alexandre Tharaud. In the '90s, it was Murray Perahia. In the '80s it was András Schiff. From 1955 through the '70s it was Glenn Gould, who pioneered Bach performance on the modern piano with his incendiary Goldberg Variations (Columbia Records, 1955).

So what of Víkingur Ólafsson and his Bach and what makes his Johann Sebastian Bach and Bach Reworks so compelling, provocative, and crucial? There are scores of excellent Bach recordings available, so shy this one? From 10,000 feet, it is the production and programming of the recording that endoreses it. Rather than select a single, large, multipart work like the English or French Suites to perform and record, Ólafsson chooses a generous number of shorter pieces, some stand alone, some taken from larger pieces, some reimagined from works scored for other instruments, some transcriptions by himself and other musicians and performers. I would term this selection of material a "recital" rather than a "sampler" because its makeup and content reflect a more thoughtful approach in assembly. This removes from the listener the expectation of what comes next that comes from multiple listenings of a piece. The element of surprise (and delight) exists and is essential to listening enjoyment.

Drilling deeper, there are the selections themselves. Ólafsson chooses individual pieces from larger solo keyboard compositions: Inventions and Sinfonias, The Well-Tempered Clavier; Preludes and Fugues. The pianist then includes transcriptions of existing pieces by other composers such as Wihelm Kempff's transcription of The Chorale Prelude "Nun freut eunch, lieben Christen g'mein," BWV 734, August Stradal's treatment of The adagio from the Organ Sonata No. 4 in E minor, BWV 528, and Ólafsson's own transcription of "Widerstehe doch der Sunde" BWV 54. Included also are transcriptions from Rachmaninov, Busoni, and Siloti.

Ólafsson did include a multipart composition in its entirety in the Aria variata alla maniera italiana, BWV 989. Its inclusion is tantalizing in that it is infrequently recorded. Scored in A minor, the composition is from around 1709, originally recorded in the Andreas Bach Book. It consists of a theme and 10 virtuoso variations, each of them in binary form (two sections, both repeated) very similar in structure to The Goldberg Variations. Ólafsson's facile touch begs one to wonder if a Goldberg Set may be in the offing (not to rush Ólafsson, this playing so refined). The sheer mirth, playfulness, and punctilious musicality of Ólafsson's playing makes the Aria variata alla maniera italiana a grand summary statement of the entire collection.

This brief survey of the works included on the release also illustrates that Ólafsson chose pieces composed throughout Bach's life, providing the listener with compositions of differing maturity (though, all are fully realized as we would expect). Bach may be seen as a definer and codifier of the High Baroque, standing in equality with the two other giants sharing his birth year, George Frideric Handel, and Domenico Scarlatti. A hypothetical meeting of these three disparate personalities is fun and delicious to consider, though it never happened. Handel and Scarlatti had a famous shootout at the keyboards where the two were considered equal at the harpsichord and Handel better at the organ. What would Handel or Scarlatti at the hands of Ólafsson sound like?

The second disc of this collection is devoted to compositional reconsideration and the addition of electronics to the performance. Here Ólafsson, and producer Christian Badzura prove forward thinking, testing the durability of both Bach's music and the taste of listeners. This experiment brings Bach into the realm of intentional ambiance, opening up Bach's music like a splash of water does a tumbler of fine highland single malt. Collaborations with cellist Peter Gregson, and composer arrangers Ben Frost, Ryuichi Sakamoto, and other so a fearless open mindedness among these artists and the Deutsche Grammophon label to take artistic risks with the canon of Western music. These are efforts to re-interpret Bach, always with the intention of revealing some hitherto unknown aspects of the composer and his music. It is often asked if Bach would have approved. I suspect so. The enduring thing about all music is, once it has been performed, it belongs to us all, a gift to be treated as such, personally and professionally.

The New York Times hailed Ólafsson "Iceland's Glenn Gould" following the release of Piano Works. While both men possess a personal touch that is identifiable a lightyear away, Ólafsson's playing possesses a playful sweetness that the great tactician Gould lacked. In that we are blessed to have both to listen to, with Ólafsson's promise for further development. He is his own man with his own voice, one for the dawn of the 2020s and beyond.