By JAKOB BAEKGAARD
December 29, 2011
Sign in to view read count 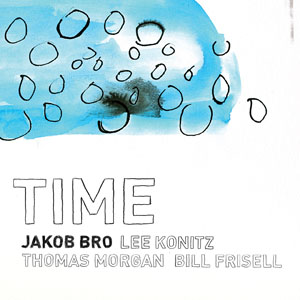 Hearing music is a journey towards discovering the world anew. If anything, this is a philosophy that the young Danish guitarist Jakob Bro has taken to heart. Throughout a career that has seen him playing in a wide range of constellations, among them groups led by trumpeter Tomasz Stanko and the late drum legend Paul Motian, Bro has never lost his intuitive approach to making music. No matter who he is playing with, there is never a sense of redundancy; instead, music becomes a serious playground where anything can happen.

Of all the projects in which Bro is involved, his recordings as a leader hold a special place. In true democratic fashion, the guitarist seems to bring out the best in his fellow players. Thus, Balladeering, his magnum opus from 2009, brought out a seasoned beauty in the playing of masterful saxophonist Lee Konitz, whose fragile tone poems on that album surpass the altoist's endeavors on the high profile Live at Birdland (ECM, 2011).

Sensing there was special chemistry between them, Konitz and Bro team up once again on Time along with guitarist Bill Frisell, who also played on Balladeering, and bassist Thomas Morgan.

Together they create an intimate and abstract chamber music that never loses track of a beautiful melody with a folk-like simplicity. The opener "Nat" ("Night") is a case in point, with its nocturnal mood and breezy blowing from Konitz and a shimmering riverbed of chords from Bro and Frisell.

"Northern Blues" is a perfect description of the aesthetic of an album whose organic sound and blue melancholy still comes across as cathartic, with a childlike sense of the wonder of creation. Thus, no-one brings the attention to the bass' tactile quality of wood and steel like Morgan, as he plucks the strings with delicacy and strength.

Overall, there is unique sense of the power of space as the four musicians transform the fluid shapes of melodies and drum-less rhythms into a moving eulogy to time as the condition of all musical art—although, paradoxically, what remains in the end is a timeless work of art.