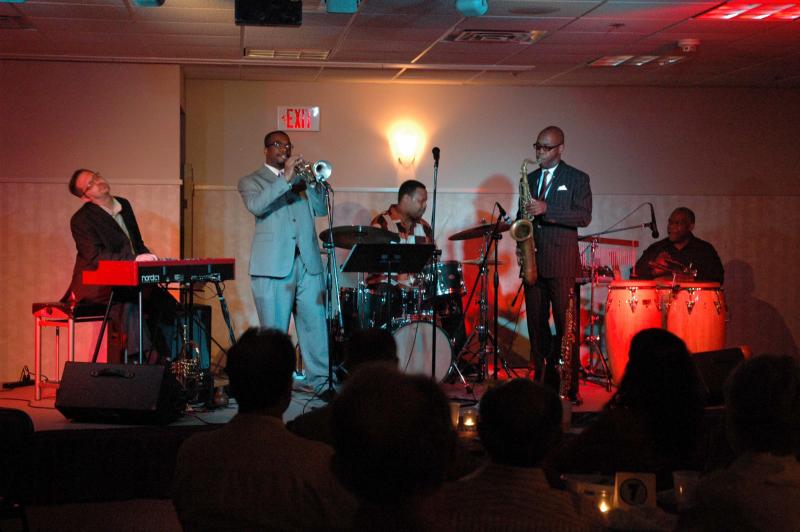 By Victor L. Schermer
June 4, 2011
Sign in to view read count
Tim Warfield and the Shirley Scott Tribute Band
Jazz Night at the Michener
The Michener Museum
Doylestown, PA
May 21, 2011

Tim Warfield is a saxophonist who came up in the Philly jazz scene and is now frequently heard on recordings as leader and sideman, performing in many venues around the country. It was obvious from this concert why he has ascended the ladder in a very competitive field: he has a unique grasp of the music, steeped in tradition yet embodying his own ideas and style; as a leader, he works well with his groups and brings his own expressive concepts to their development; and he knows how to make the music exciting and relevant for contemporary audiences. Thus, A Sentimental Journey (Criss Cross, 2010), was selected as a "Critics Choice" by the New York Times.

The instrumental configuration itself suggested a high energy level. In addition to Warfield on soprano and tenor saxophones and trumpeter/cornetist Tim Thompson—a protégé of Terell Stafford, who also performs often with Warfield—Pat Bianchi served masterfully on organ, Byron Landham played strongly on drums, and Roland Gerrero brought in a Latin feel on percussion. The absence of upright bass compelled the other musicians to generate the rhythmic pulsation, which this group did exquisitely. The overall feeling, propelled by Landham and Bianchi, was reminiscent of the dense energic of Art Blakey and the The Jazz Messengers, and Lee Morgan's grooving ensembles, that performed the likes of his signature tune, the title track to The Sidewinder (Blue Note, 1963).

The first set began with three songs from Warfield's One for Shirley (Criss Cross, 2008), which included Duke Pearson's "Cristo Redentor," followed by a drum interlude from Landham that segued into the spiritual "Calvary," a reworking of Shirley Scott's "Oasis," and closing with an arrangement of Caesar/Meyer/Kahn's, "Crazy Rhythm," from A Sentimental Journey. Warfield's and Thompson's solos were well-articulated yet achieved reserved lyricism when called for, while Bianchi echoed the sounds of Jimmy Smith, Charles Earland, and Shirley Scott herself in his walking, left-hand bass lines and upper register gospel "shouts" with his right. But most striking (pun intended) was Landham's tympani-like mallet work on the tom toms, which lent great power to "Cristo Redentor" and "Calvary." On "Crazy Rhythm," Warfield played with some brilliant intervals that gave this old standard a new feel.

Following the intermission, the group played the standard "I'll Be Seeing You," in a fine arrangement by Warfield from A Sentimental Journey, followed by the title track to One for Shirley, ending the set with a an energetic arrangement of Sonny Bono's "The Beat Goes On."

Jazz Night at the Michener is a quarterly concert series held at the Michener Museum in Doylestown, PA. Curated and emceed by Museum Director of Programs, Zoriana Siokalo, it is preceded by cocktails and hors d'œuvres. Its next concert, on October 1, 2011, will feature another Philly favorite, vocalist Miss Justine.