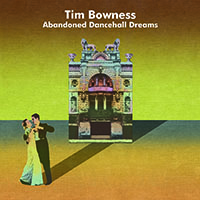 In some ways, Abandoned Dancehall Dreams was inevitable. Just as Steven Wilson, his partner in No-Man, ultimately took what is, at the very least, a hiatus from, in addition to No-Man and other projects, his primary gig with Porcupine Tree—pursuing a solo career that's led to increasing success, most recently with the studio recording The Raven That Refused to Sing (And Other Stories) and the live/studio EP Drive Home (both Kscope, 2013)—it appears that the time for singer Tim Bowness to step out on his own has also arrived. It's a risky move for an artist whose reputation has been built on more egalitarian projects like the progressive-minded Henry Fool, the aptly dark dance music of Darkroom—and, of course, No-Man—and for more than one reason, but the two most obvious are: that there's nobody to hide behind or blame for decisions made; and, as ex-Genesis guitarist Steve Hackett told Wilson, what Bowness can expect is for about 20% of his No-Man fan base to go along with them when he takes the leap.

But the rewards can be many, too—and, as Wilson has proven, Hackett's advice can be greatly underestimated. Abandoned Dancehall Dreams may have begun as a follow-up to No-Man's dreamily cinematic Schoolyard Ghosts (Kscope, 2008), it soon became clear that, rather than the collaborative effort that was No-Man, this was a record that more clearly reflected Bowness' more personal predilections. The result is an album that may well be his best recording to date under any name, and certainly continues some of No-Man's visual-rich music while, at the same time, stretching well past the boundaries of that group's defining characteristics to become something more powerful, more majestic...more monumental. While 2004's My Hotel Year (One Little Indian) was the first album to bears Bowness' name alone, as he describes in the extra booklet being provided to those who pre-order Abandoned Dancehall Music from the shopfront he has co-managed since 2001, burningshed.com, it was an album ..." created as a means of tying together several incomplete (and very different) projects I had on the go at the time. A solo album in name only, it never wholly felt mine."

Not so, with Abandoned Dancehall Music. There are, of course, many participants on the album's eight songs, inspired by dancehalls of the 1920s through the '60s in many places around the world—most now sitting empty, razed, or converted—but the overall concept belongs to Bowness, and perhaps the biggest surprise is that, while his breathy, romanticized vocal delivery remains as definitive as ever, the music of Abandoned Dancehall Dreams is on a much grander scale than anything suggested by his past work. From King Crimson drummer Pat Mastelotto's thundering propulsion of the opening "The Warm-Up Man Forever"—a song which could be read as autobiographical, were it not for Bowness' assertions to the contrary, possessing ..."elements of people I've come across on the fringes of the music, literary and art worlds over the last few decades and was an attempt to understand certain ways of thinking that are more than a little alien to me"—it's clear that there's the Tim Bowness people have come to know, and then there's the more ambitious and expansive Tim Bowness of Abandoned Dancehall Dreams.

Musically, the opening song's tribal drums reference the '80s work of artists like Peter Gabriel, while at the same time, Henry Fool guitarist Michael Bearpark adds more suitably contemporary guitar work and Andrew Keeling—the man who collaborated with King Crimson co-founder Robert Fripp and engineer/producer David Singleton on the innovative The Wine of Silence (DGM Live, 2012)—contributes some truly heady string arrangements (here, and elsewhere throughout the album ) that are created, single-handedly by renowned concert violinist Charlotte Dowding, one overdub at a time.

"Smiler at 50" is only eclipsed by the even more epically dynamic "I Fought Against the South" as Abandoned Dancehall Music's longest track, though they're both only half a minute apart, and both exceed the eight-minute mark. The two tracks begin in somewhat balladic territory, with Mastelotto's backbeat-driven groove and Anna Phoebe's lyrical violin driving the first, song-form six minutes of "Smiler at 50"—its bittersweet lyrics best described by its concluding lines: "She weeps for places where she's been / And those she'll never know." But a near-silence interlude leads into flat-out symphonic progressive rock territory for its final two minutes, Mastelotto thundering behind an orchestral/choral tour de force from Henry Fool keyboardist Stephen Bennett that's turned heavier still by Bearpark's crunching power chords, referencing past precedents like Genesis as well as some of Steven Wilson's own contemporary work, albeit less emphatic on the chops front and more decidedly on mood—though Wilson's work is, of course, never shy on mood either. Still, Bowness' music has never sounded this magnificent, this magisterial.

The sequencing of a record's material into a cogent whole—one which represents something far greater than the sum of its individual songs—often makes the difference between a good record and a great one. Following "Smiler at 50" with the sparer, piano-driven "Songs of Distant Summers" makes clear that Bowness knows how to pace an album, delivering a respite from what came before as the singer, in collaboration with pianist Stuart Laws, shapes a song about that very thing: collaborative writing, and the perils of life experience getting in the way. Still, this isn't just a simple ballad; instead, processed and wordless vocals, synth lines, orchestral swells and other atmospherics, as well as volume pedal and delay-driven guitar, turn its 90-second ending into an evocative instrumental passage of glorious, enveloping warmth and grace.

But more than simply being his best recording to date, Abandoned Dancehall Dreams is also Bowness' most eclectic. Electronics, synths and atmospherics may define much of an album that sits somewhere between the dreamy romanticism of No-Man and the more energetic progressive leanings of Henry Fool, but Bowness isn't afraid to unplug and use acoustic guitars, courtesy of Keeling—who turns out to be an even greater talent than already known, contributing guitars, bass, organ and percussion to the brighter "Waterfoot." Keeling also plays a major role on "I Fought Against the South," his flute work reminiscent of Court of the Crimson King-era Crimson, acting as a mid-song segue to a dramatic coda that builds—with Bearparks' power chords blazing over Henry Fool drummer Andrew Booker and one-time No-Man bassist Pete Morgan's august pulse—to a climactic peak before dissolving to a gentler conclusion, Keeling's multilayered flutes once again coming to the fore.

"Smiler at 52" acts as a linking premise, picking up on the character of "Smiler at 50" who, just two years later, is alone, as Bowness sings: "There were days when she was missed / There were days not like this," his delivery as poignant as ever on a tune also defined by the electronic texture of programmed drum beats, near-celestial wordless vocals and subdued but soaring strings, all anchored by Porcupine Tree's Colin Edwin, revealing more about his own talents by playing double bass, rather than the electric bass he uses on "Smiler at 50" and "Dancing for You," the latter one of two tunes where Steven Wilson (who mixed the album) contributes musically, in this case drum programming that's juxtaposed with Mastelotto's acoustic kit. Wilson also adds some guitar to the brief, tuned drum-driven closer, "Beaten By Love," broadening Bearpark's extant work as Booker's tribal drums bring the album full circle.

If there's never been any doubt about Bowness' talents, Abandoned Dancehall Dreams is, nevertheless, a revelation. His vocal style has long since grown into an instantly recognizable one, but as a writer he's never asserted himself as he has here. Lyrically he may still continue to explore the darker, more melancholic subjects with which he's long been associated, but with Abandoned Dancehall Dreams Bowness has stepped up his compositional acumen, drawing on sources ranging from Peter Gabriel and Japan to Talk Talk and King Crimson, but the end result sounding like nobody but Tim Bowness. It appears that live appearances to perform this material will be limited to a small handful of dates—where, in collaboration with the rest of Henry Fool, he'll also be performing music from that group's small but strong discography, as well as some tunes from the No-Man repertoire—but if this album achieves the critical and popular acclaim it deserves—and the advance buzz certainly suggests it will—then it will also, hopefully, be an opportunity for Bowness, like Wilson, to step out from the shadow of a group and become the leader that, based on the destined-to-be-classic Abandoned Dancehall Dreams, he's clearly ready—and meant—to be.