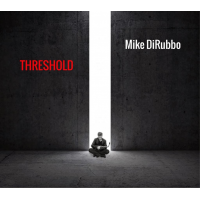 New York-based alto saxophonist Mike DiRubbo is one of the most recognizable and formidable forces in the jazz world today. A former student of the late great jazz icon Jackie McLean and a fixture in the Big Apple's vibrant jazz scene, DiRubbo is no novice. He has a substantial discography, and experience performing with some of the best players in the world. The adventurous Threshold is the artist's eighth album as leader where—with the exception of Charlie Parker's Bebop classic "Bloomdido"—DiRubbo presents a landscape of fresh new original music, superbly interpreted by the latest incarnation of his swinging quintet.

Previous band-mates, the pianist and organist Brian Charette, and drummer Rudy Royston form the core of his group and return for this effort. Trumpeter Josh Evans replaces Mike Rodriguez and Ugonna Okegwo alternates for Dwayne Burno on this recording. Regardless of the changes, this version of the quintet delivers a quality sound and rock solid performance throughout. The horns belt out a boisterous opening statement on the introductory title track, with DiRubbo laying down the first of many solos yet to come. The piece is a swinger, showcasing Royston's pounding drums and crashing cymbal accents, with Evans weighing in on a trumpet joust of his own.

Playing the alto may not be DiRubbo's best strength as a musician. The caliber of his compositions point to his talents as a writer and songs like "Where There's A Willis There's A Way," and "Sun Steps" are excellent examples. The majority of the music on this disc can be described as falling within the progressive mainstream side of jazz, with an edge. One thing is for sure, the songs all provide the perfect vehicle for DiRubbo to highlight more than appreciable chops on his instrument.

While primarily producing a lively and upbeat sound on cuts like "Curvas Perigosas," and "1970," departures from that main theme come during "Faith" and "Salter of the Earth." These two selections provide the only mellow pieces on the album, giving DiRubbo an opportunity to blow a few soft notes as he features the warm, tender side of his saxophone voice. Nevertheless, the program ends as it began, on the swinging side, with an outrageous rendition of Parker's "Bloomdido," highlighted by sparkling solos from Charette and Okegwo in closing out one very fine session of music.

Mean, crisp, burning and tender are some adjectives one can apply to the music encountered on Mike DiRubbo's showcase, and why not? This is an album bound to catch the ear of aficionados and critics who may surely find far more positive terms to describe the experience of reaching this Threshold. The musicianship is unquestioned, the charts are dynamic and the results gripping. What more can one ask for in such a musical body of work?