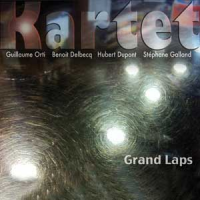 Kartet celebrates its 25th anniversary and with the latest rendition, Belgian drummer Stephane Galland replaces Chander Sardjoe and alto saxophonist Guillaume Orti adds the C-Melody and F mezzo-soprano saxophones to his arsenal. Indeed, it's a unique entity. With the ambiance of chamber music fare and uncluttered designs, the musicians generate a rhythmic nirvana via geometrically modeled ostinatos and odd-metered time signatures, while also using space as a vantage point. From a holistic perception, the soloists engineer themes that feature reverse linear progressions, or something to that effect. Hence, it's a primary source of interest because the core thematic statements could be hummed in reverse and still makes perfect sense, akin to reversible outerwear that looks good in both colors and patterns.

Pianist Benoit Delbecq and bassist Hubert Dupont launch a commanding up-tempo ostinato with Galland's buoyant pulse on "Pass Pass." Orti chimes in as the band executes angular unison choruses. But Dupont atomizes and reformulates the primary motif during his extended bass solo, serving as a rite of passage moving forward. The saxophonist's exploratory solo is given some oomph due to Galland's sweeping and crackling beats as the quartet restructures the core melody atop undulating currents and slowly winds it down for the finale. Hence, the rhythmic outline of the album and the artists' engagingly hip presentation casts a spellbinding voyage, enabling one's imagination to run amok. Count Grand Laps as an early contender for top honors in 2014.