Mary May: This Is What You Are 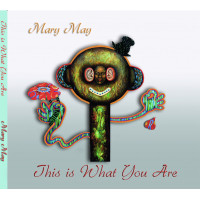 When Mary May heard Sarah Vaughan sing "If I Loved You" it blew her away. "She sang in a way I had never heard anyone sing before." Then came Anita O'Day, Nancy Wilson and Marion Montgomery. They all made May yearn to follow in their footsteps.

But Scots being—famously—careful people, it took a long time before May would opt for a career as a jazz singer, scarcely the most steady of occupations.

She continued with her studies of abstract art at Leeds Polytechnic and it wasn't until she attracted the attention of legendary American jazz vocalist Mark Murphy, who lives mostly in the UK, that she finally took the plunge.

Scots being—famously—serious, hard working people, May struggled tirelessly to establish herself, playing all the gigs she could get, including the Edinburgh Fringe, largest arts festival in the world.

Her vocal abilities—in particular her delicate phrasing and fine sense of timing—allowed her to attract a really solid accompanying band. They are with her on this, her first album.

Songs range from Wayne Shorter's "Black Nile" to Italian soul singer Mario Biondi's "This Is What You Are," with all stops in between.

"The Way You Look Tonight" begins and ends with what sounds like waves breaking on the shore. When asked about this, Scots being—famously—taciturn people, May responded, "Yes, it is waves."

All the songs are extremely well crafted but the album suffers—perhaps inevitably —from being just that wee bit too careful. Bernard Ighner's anthem "Everything Must Change" in particular cries out for some passionate abandon... doesn't get it.

There are some nice breaks by pianist Alan King and Colin Black on guitar and solid work throughout by bassist Ray Leonard, who wrote all but one of the arrangements.

At the end of the day, one can only wish the lady well. To use the vernacular: Mary, lang may yer lum reek.

Black Nile; Watching Me, Watching You; Meet Me, Midnight; Late. Late Show; Kisses In The Rain; Jeannine; Sunday Kind Of Love; The Way You Look Tonight; I Love Being Here With You; Where Were You When I Needed You; Everything Must Change; This Is What You Are.

Title: This is What You Are | Year Released: 2015 | Record Label: Self Produced