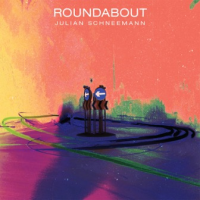 Pianist, composer and arranger Julian Schneemann must be given credit for his extreme ambition in the creation of his wonderful debut recording, Roundabout.

Not only does he mix French horn and bassoon with the more "normal" jazz instruments to get a sound one does not often hear, he has mixed "classical" music with "jazz" so thoroughly that the result is neither and both. Furthermore, in today's track-oriented world, he has dared to produce an album that is a integral, coherent artistic statement which must be listened to as a whole to get its full impact.

Schneemann does not bother to hide his classical piano training; his touch and the ability to bring out inner voices place his playing in a different realm from straight jazz players, and yet he can really swing.

On top of all of this, Schneemann's compositions and arrangements catch the mind, ear and body, while continually producing that Whitney Balliett "sound of surprise" even when the compositional, rather than the improvisational prevails. Roundabout is the result of Schneemann's efforts at combining all of his influences, with the result being unique and sounding like nothing else. While many musical styles are present, they do not stand apart from each other, but are clearly different windows in his musical soul.

And who knew that a melody could be given so many different treatments (some more radical than others) while remaining recognizable? The spine of the album is made up of five gorgeous Arias which are symmetrically arranged in the track list. Each presents, with exquisite playing, the melodic theme of the album in a different light or lens, and the connection between them is easy to hear.

Within this clear structure, the other tracks explore different and wide ranging emotions and compositional techniques while using the theme as a base, demonstrating what can happen when all influences are fair game in the creative process. Throughout, the unmistakable joy of creation permeates every note and phrase, and it is quite audible that everyone involved is having a lot of fun.

Schneemann, even at this young age, is clearly a musician's musician, and Roundabout is quite an achievement, and an album to be savoured many times over.