Toxic: Mat Walerian/Matthew Shipp/William Parker: This Is Beautiful Because We Are Beautiful People 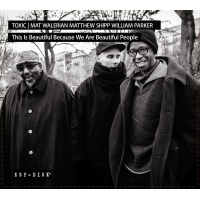 Polish multi-instrumentalist Mat Walerian is on the verge of reserving his seat in the pantheon of groundbreaking hornmen who recorded for the late Bernard Stollman's storied ESP-Disk' label. Not as frenetic as Frank Wright, nor as strident as Sonny Simmons, Walerian instead boasts a singular approach that binds Eastern influence and blues sensibility with fluent, legato phrasing, often reminiscent of Marion Brown's lyrical finesse. His first two live recordings for ESP—The Uppercut: Live at Okuden (2015) with Matthew Shipp and Jungle: Live at Okuden (2016) with Shipp and Hamid Drake—exquisitely captured Walerian's idiosyncratic sound and aptitude for holding his own while in the presence of musical giants.

For his third release, Walerian perpetuates his musical bond with Shipp while also enlisting another architect of New York City's avant-garde scene to round off the group he christened Toxic: the venerable William Parker. This Is Beautiful Because We Are Beautiful People is a significant effort for two reasons: first, it provides listeners a new stage in the musical evolution of Walerian and second, it marks a homecoming of sorts for bassist Parker. After making his recording debut on saxophonist Frank Lowe's Black Beings (1973), Parker's playing never graced an ESP release again, until now. As a result, TIBBWABP harbors the stirring music of a collective entity whose unfettered mode of expression reaffirms the album's self-assured title.

"Lesson" opens the set, manifesting Walerian's fondness for traditional Asian music through tranquil flute and shakuhachi interplay that fabricates a sonic torrent as changeable as wind. After some sparse comping by Shipp, Parker ditches his shakuhachi and with one thundering pluck of his bass, fractures the previous coalescence of woodwinds, allowing hints of tension to seep into the piece's spacious interior. A testament to the trio's adaptability, Parker's transition to bass seems to precipitate a shift in the soundscape's atmosphere from repose to skittish apprehension at its conclusion.

The extent of the trio's improvisational prowess is displayed during the album's lengthy centerpiece, "The Breakfast Club"—a sprawling body of music splintered into two twenty-minute tracks, "Day 1" and "Day 2." Despite undoubtedly playing "free," the musicians often frame improvisation through structure, as evident on "Day 1." Parker's harsh bowing provides a jarring introduction that subdues once Walerian and Shipp breed a melancholic blues feel that dominates the remainder of the piece. Shipp then delivers a steady solo, creating a faint sense of rhythm that carries onto the subsequent unbridled saxophone and bass duet. After reconvening, the trio launches into a final bout of group interaction that, yes, even swings at times. With overblown alto notes, thundering bass timbres, and convulsive piano runs, "Day 2" is even more brooding and volatile than the former, save for a hypnotic passage where all players align to a pulsating groove.

The musing title track, constantly teetering on the edges of tension and release, finds Walerian showcasing his clarinet skill. Interestingly, Shipp's backing seems more understated in this group, often trading his well-established rhythmic, staccato manner for a smoother, melodic approach. Perhaps even more intriguing in regards to Shipp, the album's concluding song, "Peace and Respect," contains a rare instance of the pianist behind the organ. Backed by the organ's sustained, velvety tone, Walerian's impassioned bass clarinet playing shines, solidifying this slow-burning track as perhaps the most ravishing of the whole.

In sum, distinct musical voices amalgamate with a shared objective of unity to create uncompromisingly beautiful music. At its simplest, TIBBWABP is an inspired album that validates its label's long-running motto: "You never heard such sounds in your life."

Title: This Is Beautiful Because We Are Beautiful People | Year Released: 2017 | Record Label: ESP Disk