Canadian singer Linda Carone's debut recording, Black Moonlight is an intentional period piece. It is a collection of ten pieces given an organic swing workout. Carone possesses a mature, sensual instrument that when combined with her period support makes for irresistible listening. The singer and support establish a light-as-feather touch, maintaining it with solid creative momentum for the duration of the recording. There are no bumps in this road. With a imperceptible tautness, Carone and company maintain a flawless, medium tempo and musical personality that is hard to hear. These performances smell of lavender and unfiltered cigarette smoke in the dark warmth of the same climes described in Billy Strayhorn's "Lush Life." Album centerpieces include "Sweet Lotus Blossom," "Oh I'm Evil," and "Blue Drag." Carone's band includes trombonist Ron Westray and bass reedman John Johnson suspended above the quartet of rhythm players including bassist George Koller, drummer Davide DiRenzo, Ted Quinlan on guitar, and pianist Mark Kieswetter. This is great easy listening music with a cold, dry martini.

Gunilla Törnfeldt
Behind the Mask
Self Produced
2017

Swedish singer Gunilla Törnfeldt is the founder of the jazz vocal combo Stockholm Voices. The group's 2015 release Come Rain or Come Shine (Self Produced) garnered positive reviews. Törnfeldt now breaks out for her second solo recording, after A Time for Everything (Self Produced, 2009). Behind the Mask is a similar outing as the singer's debut, a collection of original compositions, finely crafted and smartly arranged. Joining the singer is a new band, pianist Daniel Tilling, baritone guitarist (and husband) Efraim Törnfeldt, bassist Svante Söderqvist, and drummer Gustav Nahlin. The band is careful to allow Törnfeldt the full floor while soloing with impeccable style and nuance. The title piece is fashioned as a show tune that allows Törnfeldt to stretch her scat chops. "Look Behind You" is a spooky, mid-tempo ballad, comprised of wordless vocals carrying a light melody doubled by Efraim Törnfeldt's baritone guitar. Behind the Mask displays a singing talent fully formed and positioned for greater things. 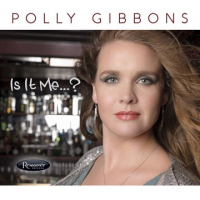 Who said that Resonance Records was only about archival recordings? While Zev Feldman does get a lot of attention, label owner and founder George Klabin turns his Midas Touch to producing new acts, one being the present British singer Polly Gibbons and her sophomore Resonance release Is It Me...?. This is Gibbon's third recording, after 2015's Many Faces of Love (Resonance Records) and My Own Company (Diving Duck Records, 2014). Gibbons' repertoire is more sophisticated R&B than jazz oriented, but her chops are secure regardless of the genre. The dozen pieces making up this recital include swinging originals like "You Can't Just..." and the title cut. Gibbons does do jazz, a bit older, in an assertive "Wrap Your Troubles in Dreams" and the muscular "Basin St. Blues." Gibbons is supported by capable rhythm and horn sections that included pianists Tamir Hendelman and James Pearson, bassist Kevin Axt, and drummer Ray Brinker. The reeds include the incomparable Bob Sheppard and Tom Peterson. This is a fun and well-produced recording that should satisfy even the fussiest of listeners. 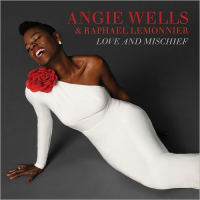 Some vocal recording debuts are tentative and readily sound as such. Not so, for Philadelphia singer Angie Wells. On her newly minted Love and Mischief, she spins out eleven (including one bonus track) mostly standards (with two originals) that are burn-the-barn smoldering with a centripetal swing. Well's has a sharply-balanced alto voice that suffers fools and bad material poorly. Full-service pianist Raphael Lemonnier is given almost equal billing for providing a complete range of musical moods for Wells. On the original, "She Ain't the Kind of Girl," Lemonnier pulls out his best churchy Gene Harris, pouring the gasoline on this seething expression of desire. Wells and Lemonnier update Fats Waller's "Ain't Misbehaving" with a jaunty rhythm and time while caressing "I'm in Moody's Mood for Love," a medley of "I'm in the Mood for Love" and "Moody's Mood for Love." This performance is simply exceptional. Intimate and close, Wells and Lemonnier, with guest vocals by Bili Redd (who also joins Wells for a sexy "Baby, It's Cold Outside) demonstrate the proper way to play a ballad. The surprise of the disc is the bonus cut "One Mint Julep," performed in a solid 1960-soul-jazz style. Angie Wells has arrived...big time.

Here is the curveball of the bundle. Multi-instrumentalist and composer Jeannie Tanner has composed a collection nineteen songs and divided them up among twelve prominent Chicago singers in a 2-CD set, Words & Music. At minimum, this is an ambitious project and one with its share of potential logistical headaches. That said, this recording comes together superbly. Tanner's music and lyrics are given a proper exposition by these varied singers Tanner demonstrates a real knack for lyrics and melodies cast in styles from Samba to 1960s Sinatra. Whether it is Rose Coletta's bouncy performance of "Promise Me the Moon" or Alyssa Allgood sepia toned "Fred and Ginger," the composer's desires are readily apparent. The band for the project is expertly steered by keyboardist Dan Murphy who apparently possesses command of jazz styles, from New Orleans Drag (Kimberly Gordon's "Kiss Me") to the piquant blues (Michele Thomas's "Can't Believe That It's You"). Well done, Jeannie Tanner! This is music!