By Chris Mosey
May 28, 2017
Sign in to view read count
The Copenhagen daily newspaper Berlingske Tidende in 2015 called Margrete Grarup "the best kept secret in Danish jazz." In 2017, with two albums released in rapid succession on Storyville, that secret is out... and a star is born.

Grarup has a wonderfully rich and expressive voice. She comes to jazz via the Scandinavian blues and gospel scene. There she would sing "down in Mississippi where I come from" like she meant it. She's actually from Aalborg in north-eastern Denmark.

Clasping the microphone stand, stamping out the rhythm with her foot and swaying to the beat, Grarup joyously cocks a snook at the Jantelag or Law of Jante. Formulated by Danish author Aksel Sandemose, this describes a facet of the Scandinavian mentality in which individual brilliance must be curbed in favour of collective mediocrity.

The law's stultifying influence is felt throughout Scandinavia. It is perhaps telling that on her second album, titled simply "Standards," Grarup is denied top billing, relegated instead to being just one of a quartet led by veteran bassist Mads Vinding. On the cover, the quartet is pictured in profile so that it's difficult to pick out any one individual.

To put it in context, try to imagine Billie Holiday being listed as merely one of "The Teddy Wilson Quartet." 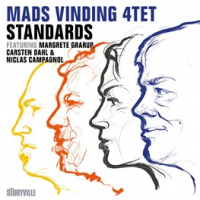 The trouble with standards is that too often they tend to be just that, set in stone to be endlessly regurgitated by every new vocal talent that comes along. Grarup wants none of this. She takes Cole Porter's "Love For Sale" and—shedding the dust of a thousand different versions—reveals the song Porter intended: the cynical but plaintive cry of a young girl languishing in a Depression era brothel.

Perhaps the cry emanated from the songsmith's own soul. Gay long before the term was invented, Porter was doomed all his life to be "queer" and condemned to life in the closet.

At the other end of the scale, Grarup's version of "Over The Rainbow," strips away the Hollywood schmaltz of Judy Garland et al, to unveil a pristine anthem to youthful innocence.

She gives "Autumn Leaves" a poetic relevance it probably hasn't enjoyed since 1945 when it was known as "Les Feuilles Mortes" (The Dead Leaves) with bitter/sweet lyrics by French scenarist Jacques Prévert.

Anxious not to get bogged down in a jazz hinterland where poetry borders on pretension, Grarup takes refuge in the blues with a rocking version of that venerable 12-bar, "Everyday I Have The Blues." Originally recorded in 1935 by Pinetop Sparks, reworked by Memphis Slim in 1949, it was immortalised by the Count Basie band and vocalist Joe Williams in the 1950s. Towards the close, Grarup gets low down and dirty, her growling tones bringing to mind the great Bessie Smith.

She cools things down with a low key version of the ballad "Blame It On My Youth," written by Edward Heyman and Oscar Levant in 1934. It is slightly marred by an overlong introduction in which she hums the melody. 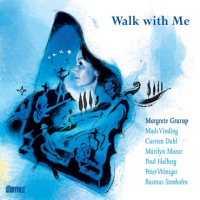 Chronologically, this album came first of the two but it's of less interest to jazz fans; laid back (at times verging on soporific), the whimsical scene is set by Jeppe Grangaard's sleeve illustration, reminiscent of Finnish author Tove Jansson's pictures for her Mumintroll children's books. Grarup is pictured dancing through a dream landscape, before finally coming to rest on what looks like a Buddhist lotus blossom.

The opener, "I Wish," on which she is joined on vocals by her 19-year-old daughter Clara-Marie, is her own composition. She says her aim is to find out what life has in store. There are some nice lines—"I want to go to heaven but I don't want to go too fast"—before she cries out in confusion, "If only I could read the dealer in this goddamned deck of cards."

The gospel title number "Walk With Me" was taken from Mahalia Jackson's classic album In The Upper Room. It's a heartfelt tribute by Grarup to one of her idols.

The dirge-like "Salme Med Vejs Ende (Hymn For The End Of The Road) was written by pianist Carsten Dahl. The lyrics by Lisa Freeman start in Danish then go over to English. They emphasize the need to cherish each moment in life.

"Nature Boy," a hippie anthem ahead of its time by eden ahbez (real name George Alexander Aberle) was first recorded by Nat King Cole in 1947. It became a huge hit when the long-haired, bearded ahbez was discovered by journalists sleeping rough under the Hollywood sign in the hills overlooking Los Angeles.

For her walk "On The Sunny Side Of The Street," Grarup is accompanied only by Peter Weniger on saxophone. Then, on Hoagy Carmichael's "Georgia" it's just her and Rasmus Stenholm on the Hammond organ. Things start to get a little sleepy at this point.

But then the medley of "Strange Fruit" and "Summertime" makes the listener sit up. It is presumably meant to say something deep and meaningful about life before Civil Rights in the Deep South but is just a wee bit too naively over the top to hit the spot. This is especially true of "Strange Fruit," where it is just Grarup and Vinding "doing sounds on the bass," as he puts it. There's a fine, extended soprano saxophone solo by Peter Weniger on "Summertime."

Next comes an exquisite version of "Blame It On My Youth" and a rollicking "Everyday I Have The Blues" before Grarup exits unaccompanied on that sea of schlock, "What A Wonderful World." Just because Louis Armstrong recorded the song, doesn't make it jazz or dignify a lyric that drips with cloying sentimentality.

To sum up, it's five stars for Standards, four for Walk With Me, one being for best intentions that don't always succeed.

Tracks: Love For Sale; Autumn Leaves; You Don't Know What Love Is; Everyday I Have The Blues; Blame It On My Youth; Over The Rainbow.

Tracks: The Wish; Walk With Me; Salme Med Vejs Ende (Hymn For The End Of The Road); Nature Boy; On The Sunny Side Of The Street; Georgia On My Mind; Strange Fruit/Summertime; My Funny Valentine; Blame It On My Youth; Everyday I Have The Blues; What A Wonderful World.