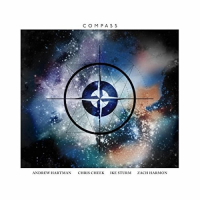 New York-based jazz guitarist Andrew Hartman offers his second album as leader with the modern jazz-like Compass featuring nine originals and a newly-arranged rendition of the Paul Simon classic "America." The music is decidedly modern with a taste of the Brazilian and Indian musical influences. Originally from Cincinnati, OH, Hartman moved to London, UK in 2011 where he worked as a freelance musician and teacher and during that time, the guitarist began working on a handful of compositions and arrangements that served as the basis for this album. After moving to the Big Apple, Hartman has become a fixture in the city's vibrant jazz scene which has become ground zero for the launch of this new recording.

One defining characteristic integral to the success of any recording, is the cast of players one surrounds themselves with and on that score, Hartman chooses wisely. The Hartman quartet is comprised of seasoned musicians like bassist Ike Sturm, drummer Zach Harmon and saxophonist of note, Chris Cheek—all young lions of the business.

The project begins with two intricate musical pieces with "The Heights" and "Waiting" establishing the progressive textures and soaring melodies found throughout the set. Simon's "America" receives a new treatment with Cheek's tenor phrasings, Harmon's crashing cymbals and the leader's delicate chords dressing up the melody so to be almost unrecognizable. One of the standout pieces of the set is the peppery and swinging "Chic Korea" (notice the spelling) not to be confused with the great pianist Chick Corea as there is no piano in this band nevertheless, a terrific tune featuring solid solos from the saxophonist and leader.

The "Indian" musical influence is clearly present on "London Blues," while "Breaking Light" displays a tinge of the Brazilian flair and is another one of the many superb tracks contained herein. Other notable pieces include "For Marie Elaine," "New Day" and the finale tune "Family Tree." Kudos to guitarist Andrew Hartman for crafting such an engaging and exceptional work of art, Compass is a directional-setting musical indicator guiding Hartman and crew through the jazz landscape and on the right path to hopefully, some well-deserved attention.