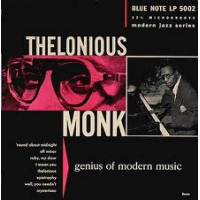 It's not hard to imagine where the bebop pioneers found their new sound in the late 1940s, after World War II. It emerged from the big bands, which were dying. It was a natural progression. Hard-charging, uber-fast soloists pushed the limits of speed and rhythm, to the chagrin of the jazz establishment, but to the thrill of listeners. It was new, but it wasn't a giant leap—more of an incremental step.

Thelonious Monk was there. But it's clear from Genius of Modern Music, Volume 1, that Monk was hearing something very different in his head than what Dizzy Gillespie, Charlie Parker and Bud Powell were hearing. This CD chronicles the first recording sessions with Monk as leader in 1947, and it's clear that Monk, even at this very early date, was creating something no one had heard before.

It's hard to put the Monk sound into words. It's off-kilter, with unusual rhythms and unexpected notes. It's melodic, but not of the standard Tin Pan Alley/Great American Songbook variety. It is fast and improvisational, but just a little bit different than the usual bebop flights of fancy.

Genius of Modern Music, Volume 1, features the first recordings of many classic Monk tunes by Monk. Each runs about 3 minutes, so there are no lengthy solos. Each is simply a nugget of angular melody, followed by short solo sprints, then it's off to the next tune.

Oh, but what's there is choice. While the horns play the expected bebop riffs, Monk is off doing something almost completely different. It's not that the horns don't get Monk. It's that Monk, even in 1947, was already pushing past the standard bebop tropes.

And what a selection of classic Monk tunes. There's "Thelonious" and "Off Minor" and "Ruby My Dear" and "Well You Needn't" and the all-time Monk ballad pleaser, "Round Midnight." These are the first takes ever by Monk on record and they are fully formed. Historically, these are comparable to Louis Armstrong's Hot Fives and Sevens, or Duke Ellington's jungle bands of the 1920s and 1930s—but with much better sound.

The horns are OK, but not all-star quality. Idrees Sulieman and George Taitt on trumpet, Danny Quebec West and Sahib Shihab on alto, Billy Smith on tenor are good, but not great. The drumming by Art Blakey is innovative. But it's Monk you came to hear, and his piano sound is as original and, yes, fun as you'd expect. It's heard best on the 10 sides with just a piano-bass-drums trio.

There's more where this came from. Volume 2 features Monk sessions from 1951 and '52, including one with Kenny Dorham on trumpet and Lou Donaldson on alto. And there another CD featuring Monk and vibraphonist Milt Jackson. You can find them all on the box set of Monk's Complete Blue Note Recordings—a very worthwhile investment.

But for a one-disc treat of historic Monk that is extremely listenable, you can do much worse than Genius of Modern Music, Volume 1.