Home » Jazz Articles » Ronnie Boykins: The Will Come, Is Now 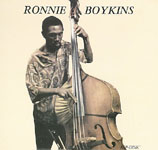 Ronnie Boykins is probably best known for being a member of the Sun Ra Arkestra. During that time, the Arkestra made some of its best recordings and Boykins was an integral part of the equation. He integrated his relationship with Sun Ra to gear the forward movement of the music. In his individual contributions on the bass he gave the instrument an underlying voice in developing the thematic concept through his choice of notes, the use of arco and his chord patterns.

Boykins' ability saw him called up by Marion Brown, Bill Barron, Rahsaan Roland Kirk and Steve Lacy in a long list of collaborations. Challenging music was not his only forté, he moved from free invention into the mainstream with Mary Lou Williams and played the blues with Muddy Waters. Boykins went on to lead the Free Jazz Society and then went into the Melodic Art-Tet. In spite of all his accomplishments, Boykins was modest. When Bernard Stollman asked him to record for ESP in 1964, Boykins said that he was not ready. Eleven years later in 1975, he was.

Boykins' music is the confluence of several streams. He places as much emphasis on composition as he does on improvisation, with the title track profiling the two. Boykins sets up the groove for the Middle Eastern melody, the antithesis for horns which blow asymmetrical lines. It's a constantly shifting vortex, with Joe Ferguson indulging in the melody before the other horns come in to dissect it. The final shift comes from Boykins, whose bow arcs both melody and dissonance while the percussion dances niftily below.

"Demon's Dance" is a wild swinging tune with a generous dollop of New Orleans rhythm, quite mainstream and a delicious romp. Boykins gift for melody is apparent on all the tracks. "The Third I" loosens that grip for an open invitation to percussion and congas. The insistent rhythm is scarped by the bassist, whose arching lines cut deep into the pith. The flute flutters in but the resolution is completed by Boykins, who bares the melody and then wraps it up with the rest of his band.

Boykins made just one record as leader, but it marks his place as an adventurous bassist and a composer with a gift for style and genre.