The Fully Celebrated: Drunk on the Blood of the Holy Ones 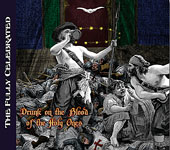 For Drunk on the Blood of the Holy Ones, Boston's The Fully Celebrated have dropped the orchestral tag from their name, but retain their wide ranging eclecticism, all transmuted through a jazz prism. Though altoist Jim Hobbs composed all eight tracks, it is the tight syncopation of bassist Timo Shanko and drummer Django Carranza that breathes impudent life into them. A shared history in roots reggae bears fruit on the title track but Hobbs and Shanko have also plumbed the further reaches of free jazz and their facility across a range of styles is in evidence throughout this disc, plus an animated video set to a track from their Lapis Exilis (Skycap Records, 2006).

The opening "Moose and Grizzly Bear's Ville" sounds as if Hobbs is paying homage to Ornette in both his phrasing and tone, while the skronky "Reptoid Alliance" conjures up a pared-down acoustic Prime Time. Elsewhere Hobbs reproduces the tonality of an erhu (two-stringed Chinese violin) on the pentatonic scales of "Brothers of Heliopolis," then mimics the cadences of a blues singer on "Pearl's Blues (Your What Hurts?)." On "Conotocarius" he channels folky bagpipes before loosening up for some squalling power play over freeform tumult, while the closing "Dew of May" combines a melancholic folk ballad ambience with a more joyful release. While for some this Catholicism may evoke pastiche, it doesn't quite mask a serious intent and makes for an irreverent ride.

Moose and Grizzly Bear's Ville; Reptoid Alliance; Drunk on the Blood of the Holy Ones; Brothers of Heliopolis; Enemy of Both Sides; Pearl's Blues; Conotocarius; Dew of May.

Title: Drunk on the Blood of the Holy Ones | Year Released: 2009 | Record Label: AUM Fidelity