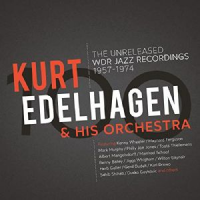 This 3xCD collection of recordings by Kurt Edelhagen & His Orchestra is culled from over three thousand individual tracks recorded under the auspices of Cologne, Germany radio station WDR over close on twenty years. It is, as the expression goes, a curate's egg. That is to say, parts of it are excellent and parts of it are not. A big band whose sidepersons, as opposed to guest soloists and arrangers, are not named in the liner booklet, the ensemble was, particularly early on, a well-drilled but anonymous outfit. Things perk up considerably, however, as the chronology progresses and disc three is reached.

The twenty-nine tracks on the first two discs, covering 1957—1967, are mostly routine affairs. The guest soloists and arrangers—who include such distinguished names as future bandleader Francy Boland, saxophonists Sahib Shihab and Wilton 'Bogey' Gaynair, and trumpeters Jimmy Deuchar and Shake Keane—were presumably under instructions not to frighten the horses, as another English expression goes. Even Tubby Hayes, who wrote, arranged and solos on flute on disc two's penultimate track, "In The Night," sounds workmanlike rather than on fire.

The third disc is altogether different and on the evidence of its eleven tracks it is a shame that the years it covers, 1968—1974, did not form the basis for the entire box set. Edelhagen and his bosses at WDR appear to have loosened the reins: most of the tracks last longer than those on discs one and two, averaging between seven and eight minutes, and the music takes risks. Guest soloists and arrangers include the aforementioned Keane and Gaynair, plus trumpeters Kenny Wheeler and Maynard Ferguson, drummer Philly Joe Jones, trombonist Albert Mangelsdorff, pianists Carla Bley and Gordon Beck and guitarist Gary Boyle. Standouts include Ferguson's high-voltage, Spanish-tinged showcase "Ole," which he wrote and on which he solos, Bley's spiky "Oni Puladi," Mangelsdorff's edgy "Triple Adventure, Paris Rutherford's fusionesque "Black Eyed" and Wheeler's closer, "Ow Ballad."

Edelhagen passed in 1982, aged only sixty-two. Had he lived longer, more first-class music might have been recorded. Maybe Jazzline Classics could think about another CD or two along the lines of disc three?