Home » Jazz Articles » Chris Dingman: The Subliminal and the Sublime

Chris Dingman: The Subliminal and the Sublime 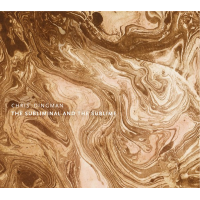 Search the word "subliminal" and you get the following: "below the threshold of sensation or consciousness; perceived by or affecting someone's mind without their being aware of it." Do the same for "sublime" and you have to be sure you include the word "definition" or else you get the website for the popular ska- metal band. But, seriously, the word sublime is really quite interesting and may refer to "something of such excellence, grandeur, or beauty as to inspire great admiration or awe." Or it may refer to a solid substance that ..."changes directly into vapor when heated...."

Listening to vibraphonist and composer Chris Dingman's album The Subliminal and the Sublime, it's not hard to fathom that he had all three meanings in mind. Dingman hits you hard with the subliminal right off the bat on "Tectonic Plates." The piece opens with a minute or two of that gentlest of sounds: bowed vibes. Here, Dingman's playing chords that suggest wide-open spaces, vast expanses, cloud movements. Guitarist Ryan Ferreira joins in—also subliminally—as Loren Stillman's alto intones a languid melody. There's a similar, somewhat darker, passage at the beginning of "The Pinnacles," where Ferreira plays the key role. Dingman and his band are clearly not afraid of silence, and their restraint is nothing less than remarkable. These moments set the tone for the entire album, which is actually a suite of interrelated compositions commissioned by Chamber Music America.

There's a readily-palpable sense of grandeur and wide-eyed amazement to Dingman's melodies, harmonies and arrangements. Not grandiosity, but genuine heartfelt, child-like wonder inspired by the sights and sounds of the natural world: a swarm of fireflies, time spent amidst redwoods, strange rock formations, and a view of the desert landscape from an airplane seat. Fittingly, Dingman's lengthy compositions unfold at a languid, unhurried pace, ambling through a variety of harmonic- rhythmic terrains. Dingman's musical influences are many: clearly he's spent some time listening to Pat Metheny, Gary Burton, Eberhard Weber, and the like. There are elements of Minimalism here, as well, though they're employed subtly and as a means of conveying Dingman's observations on the cyclicity of natural processes. Seriously. There are even traces of Dingman's early mentors at Wesleyan College: Anthony Braxton, Jay Hoggard, and Pheeroan AkLaff. While not aggressively avant-garde, Dingman's music is clearly post-modern, and influences from outside the jazz world are as significant as those from within.

Dingman's subtle, flowing, many-faceted jazz-based compositions are given life by a truly amazing band featuring some of New York's busiest and most accomplished young musicians. There are lots of wonderful solos here, but the real story is the sound of the ensemble. Dingman's carefully thought-out juxtaposition of three chordal instruments is quite distinctive. Rather than occupying a cluttered landscape of comping and harmonizing, piano, electric guitar, and vibes are carefully layered, each occupying a designated musical space.

As the only wind instrument in the ensemble, Stillman's velvety alto stands out as the lead voice. He and Dingman get most of the solos, while pianist Fabian Almazan and Ferreira play primarily supportive roles. Yet, Almazan's sparkling, inside/outside piano solo on "All Flows Forth" may well be the single most scintillating improvisational moment on the album. Bassist Linda May Han Oh and drummer Justin Brown propel but never overwhelm. Brown, in particular, does a masterful job of prodding the music forward without overplaying.

Dingman's previous album as a leader, Waking Dreams (Between Worlds Music, 2011) contained a note that urged the listener to experience the album in its entirety. One should apply the same directive when experiencing The Subliminal and the Sublime. Dingman's music is both inviting and thought-provoking; it's challenging and yet it puts one at ease. Truly one of the year's finest recordings in any genre.

Tectonic Plates; Voices of the Ancient; Plea; The Pinnacles; All Flows Forth.