Jason Stein: The Story This Time 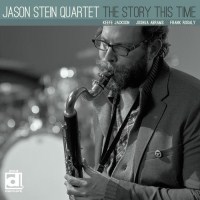 The two horns, bass and drums quartet is becoming a commonplace grouping even though it hasn't quite reached the saturation point of the piano-bass-drums trio. A consequence of this instrumentation is the obvious decline in novelty value and, indeed, the ability to catch the ear, but this is a leader and group only too aware of that, which explains why this is such a fresh body of music. Jason Stein also plays the bass clarinet exclusively, which in a sense pays tribute to Eric Dolphy's work almost half a century after his death, which isn't to suggest that Stein owes Dolphy a debt, however; he is as much his own man as Rudi Mahall, another present-day member of the bass clarinet league.

In opening with Warne Marsh's "Background Music" Stein serves notice of his knowledge, too. The combination of his horn and Keefe Jackson's tenor sax results in a fractious line of sonorous distinction. The leader is busy in his solo while Jackson alludes to the song's composer in a pleasingly unanticipated way.

ADVERTISEMENT
The inclusion of compositions by both Lee Konitz and Lennie Tristano suggests some stylistic allegiance, but the former's "Palo Alto" receives a treatment which by turns takes in the abstract and the composed. Again Stein and Jackson come up with new colors simply through playing the head together, while bassist Joshua Abrams and drummer Frank Rosaly prove themselves exponents of the kind of constructive interventionism of which Tristano would have thoroughly disapproved.

Stein's "Hoke's Dream" has faint echoes of the kind of thing John Carter was putting down on paper in his later years, but still the music is impregnated with a most welcome strain of individuality . It shows both what a highly creative unit this band is now and its undeniable promise for the future.