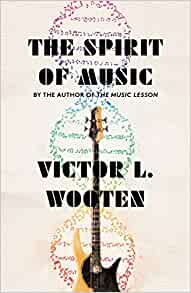 When he is on stage with Bela Fleck, Victor Wooten radiates such an earnest persona, it's easy to forgive him for the flash and flamboyance he displays in his solo spots. Likewise when he writes, his passion so thoroughly infuses his somewhat fatuous concepts, it is only his execution that sometimes comes into question.

With his second tome, The Spirit of Music, Wooten wisely uses an indirect method of introducing and inculcating readers with the nuances of music theory, practical and mystical. At least most of the time: as with its predecessor The Music Lesson: A Spiritual Search for Growth Through Music (Berkeley, 2008), while his gifts as a life coach for self-realization and personal actualization leave a bit to be desired, Wooten proves himself something of natural artisan of prose, lacking only the kind of mature supervision as he receives with the aforementioned band he co-founded.

In fact, the author's slow but sure means of building his narrative illustrates one of the fundamental, if only implied, themes of this book, that is, music as metaphor for life and how to live it. Beginning with an alternating series of near-hallucinatory sequences involving strangers he encounters and dialogues with his parents, Wooten's initial crescendos of writing catch the attention before he begins an almost subliminal outline of his thesis on music as a dying form; like the best yarn-spinners, he captures the attention just as he plants the first seeds of suspense, then begins nurturing them. Unfortunately, rather than bloom to full flower, the underlying superficiality of the premise— captured with the overly-clever designation of chapters as 'Measures'— never reaches the satisfaction of fruition.

Described in a back-cover blurb as an allegory, The Spirit of Music certainly qualifies as a parable of sorts. By the time its three-hundred sixty-eight pages have passed, however, it's turned into one more than a little nebulous, at least insofar as it applies to the definition within its title. Fortunately, reading The Lesson Continues serves as something of a corollary to the experience of listening to music itself: anyone who's found him/herself lost in concentration on or immersion in a piece of music in any style/genre will recognize the rhapsody Victor L. Wooten aims to conjure, even if he doesn't exactly hit all the right notes.

The once and future Flecktone has interwoven a dramatic framework built upon high-minded philosophical musing(s). As a result, like that interval of music wherein the improvisation is difficult if not impossible to distinguish from the composition/arrangement, his lofty themes serve as means to objectively and indirectly expound upon the mystical power of this greatest of all the arts. That said, the mystery premise that kicks in around page one-hundred leaves something to be desired.

The 'men in suits with headphones' motif smacks of an all too facile take on the agents in shades in The Matrix movies. Accordingly, this faceless corps dubbed 'Phasers' becomes caricature in fairly short order and thus exudes little real menace. Wooten doesn't seem to have thoroughly thought through his concept: there's only minimal logic in play, going all the way back to his encounter with Jonathan, a kindred spirit to the author, as well as the writer's other two new acquaintances, Ali the philosopher and Seiki the runaway musician. Because of this random an approach to plot, when this its denouement (sic) arrives, the anti-climactic nature of this battle of good and evil becomes almost wholly moot.

Fortunately, Victor L. Wooten preserves his innately musicianly nature here. He paces himself well in the delineation of his story, avoiding heavy-handedness—though just barely sometimes—by interspersing the elements of the war with the villains with explications of musical theory, some practical and some rife with near-laughable cosmic overtones. For instance, (too-)obvious puns and glib plays on words—such as the defining inference in the definition of 'time signature' as a means of mastering a certain chronology of events—alternates with the introduction of new characters such as Brandon, the employee of a Nashville music store. The progression is (thankfully) to akin to one of his memorable bass guitar solos, then, clearly wrought statements of melody alternating with nebulous dissonance, while beat heavy grooves give way to more random rhythm, then back again for final resolution.

The Spirit of Music is not just a book for reading cover to cover. It will also function well as reference for self-help and life-coaching, albeit a somewhat amateur sort cloaked in a passionate musicology. Not surprisingly then, those who read this sequel before The Music Lesson won't suffer appreciably: while the latter is all too similar to Carlos Castaneda's encounters with Don Juan, there is reciprocal affirmation between the two publications, almost as if the two were written all at once in extended form, then naturally edited into parts. As such, this content is not wholly unlike an instrumental arrangement devised for a musical composition. Victor L. Wooten wisely refrains from straying far from his field of expertise.