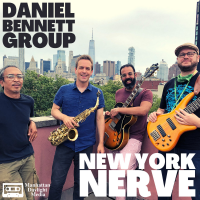 "This is not a pandemic record, but it is," says Daniel Bennett about his latest album. What might come across as a paradoxical statement is, from the multi-instrumentalist and composer's lips, a poignant assessment of his creative turn. "I didn't go on pause at all. I did my best as a human, using common sense while taking the blessings I had in my life. I didn't want to be consumed by fear. No disrespect, of course, to everyone who has been deeply affected by this, but we lost our way. All those self-imposed cancellations were unhealthy. I would take my kids to Central Park and it was just silent. It didn't need to be that way. Thankfully, musicians were out there playing."

Among those musicians was Bennett himself, who gave over a hundred outdoor performances over the past year. One of his regular gigs placed him outside the Canary Club, often in duet with bassist Mike Feinberg. Despite maintaining proper social distance, their performance went briefly viral. "People were shocked by the video," Bennett recalls. "Anyone closely impacted by all of this has every right to feel that impact, but there was no reason why, as a society, we needed to become so morose about it, too. It may sound like I'm being flippant, but we lost our chance to step up and be leaders. We wanted to bring joy to people in this challenging time. I had no pushback from any of our listeners. People needed music. People thought I was being insensitive, but it was never meant to be. The intensity of this time we're living in was all the more reason to push through it."

Icing that cake of sentiment is the fact that Bennett's was quite possibly the first jazz group to step into a Manhattan studio after businesses started reopening in 2020. Alongside Assaf Kehati on electric guitar, Kevin Hailey on electric bass, and Koko Bermejo on drums, he crafted something more than joyful; he created a generous gift of the spirit to lift hearts and minds from the murk of our collective trauma.

Bennett acknowledges the tongue-in-cheek title, New York Nerve: "We had a lot of nerve to do what we did, as did any artist pushing out creative content at the time. People were leaving NYC because they couldn't stand to see empty streets. Witnessing this was just as frightening as the pandemic itself. We were holding our ground."

One may easily read that forthrightness into the Mike Post-inspired opener, "Television." Conceived in the dimly lit wonders of Tomi Jazz, it was the inauguration of the recording session proper. Its we're-experiencing-technical-difficulties quality feels more than appropriate: our zeitgeist in the form of a theme song. Bennett's technical skills turn on a dime while his emotional undercurrents reveal themselves in flashes of inspiration so as not to betray too much of their therapy. This is not an imposition but a willful subversion of sensationalism in favor of personal expression.

From there, we sit down with "The Town Supervisor." The beautiful surf rock qualities here spin an atmosphere that pervades but never invades as Kehati's chameleonic style riffs beautifully over Bennett's overdubbed keyboards (used to especially inspired effect in "Human Playback"). All of which seems to foreshadow the album's closer, "The County Clerk," in which small-town safety gives the listener a warm welcome in the arms of Hailey's bear-hugging bass.

What fascinates and delights about Bennett's music, perhaps here more than ever, is its ability to constantly shift without ever breaking a seam. As Bennett puts it, "My music is a campfire song that keeps changing keys. We use common tones to smooth over those constant modulations. The last thing we want is for it to sound 'difficult.'" For proof of concept, behold "Gold Star Mufflers." Having previously appeared on 2018's We Are the Orchestra (Manhattan Daylight Media), it glistens in its present iteration as a reminder that, despite the noise of this world, there is always respite to be found somewhere within. Indeed, Kehati's solo always keeps one hand on the steering wheel as if to remind us that destinations never move; only we do.

Another striking aspect to note in these (mostly) new tunes is the sharpening of Bennett's tone, which is the self-conscious result of having to project the voice of his instruments in various outdoor settings. "Rattlesnake" is a high point of the set in this regard, using its propulsions to evoke an exploratory quality.

With such imagery in mind, it's all we can do to take stock of what we've been through as a society and as a global community. We must also realize, however, that breaking free from the grip of this pandemic requires more than a mindset that says it's okay to get everything back on track. All of us are irrevocably changed and we must dig deep to do the emotional work required to move on with all that we've learned intact. But music has always been a place to mold our darkest hurts into shapes of all sizes and configurations.

"The cultural renaissance needed to be in our hearts and needed to start a year ago," Bennett agrees. "It's not going to start right now just because we're reopening. All the struggles are still the same. It's not some cosmic thing that's going to happen on July 1, when we give each other a group hug and convince ourselves everything will be okay. No one was scared of us when we performed outside. Everyone embraced it. Not because it was me but because it was musicians playing. I was scared, but I forced myself to be out there. The love of humanity doesn't just go away. The pandemic made us think that everything is changing and that music would never be the same, but I don't think it's true."

If the sounds documented here are any indication, we can look forward to a hopeful future where truth is restored and music is its time capsule.