BY DAN BILAWSKY
November 28, 2011
Sign in to view read count 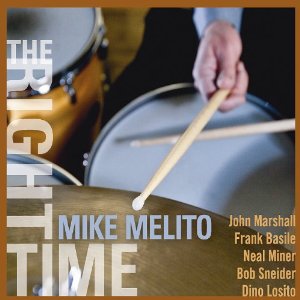 When the word "predictable" shows up in music reviews, it's often wrongly viewed as the kiss of death. Somewhere along the way, "defying expectations" or "charting new territory" have become the quickest way to gain recognition, but the tried-and-true shouldn't be sold short. On The Right Time, veteran drummer Mike Melito and his band deliver a mixture of new numbers, rarely heard tunes and classic jazz gems, and, though many of them basically rely on a fairly predictable head-solos-head format or a slight variant, that's not a bad thing.

Melito and company proudly carry the bop and hard bop torches as they swing their way through this music, and nary a weak link can be found among them. The front line of baritone saxophonist Frank Basile and trumpeter John Marshall automatically brings to mind the famed pairing of Pepper Adams and Donald Byrd simply based on the instrumentation and style, but guitarist Bob Sneider alters the sonic chemistry of their heads when he joins the party. On the other side of the equation, pianist Dino Losito, bassist Neal Miner and Melito all prove to be experts at playing both sides of the field, lending solid support to the soloists while also displaying excellent on-the-spot credentials when stepping forward into the spotlight.

While The Right Time comes and goes with mid-tempo, neglected John Coltrane works—opening with the saxophonist's "Pristine" and closing with his "Just For The Love"—the music in the middle comes from a variety of sources. Sonny Clark's "Royal Flush" brings some swaggering swing into the program, British trumpeter The Osian Roberts/Steve Fishwick Quintet's "New Bossa" puts a taste of Brazil on the menu, and the lone ballad, "All The Way," showcases Marshall's lyrical trumpet work. Gigi Gryce's "Nica's Tempo," one of several classic tunes written in honor of jazz heroine Pannonica De Koenigswarter, also serves as a fitting reminder of the genius of its composer, while a caffeinated take on Clifford Brown's "Daahoud" proves to be the perfect mid-album pick-me-up.

In the end, the fact that Melito stays his course throughout the album, delivering quality musical craftsmanship in predictable fashion, plays to his advantage. The Right Time is proof that walking where others have tread doesn't have to have a negative connotation attached to it if the musical performances have merit.