Home » Jazz Articles » Ari Hoenig: The Pauper And The Magician

Ari Hoenig: The Pauper And The Magician

By Ian Patterson
January 17, 2017
Sign in to view read count 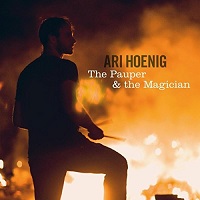 Concept albums have largely been the domain of progressive rock bands, whilst jazzers tend to prefer the term 'suite' to describe thematically linked pieces of music. Ari Hoenig's The Pauper and the Magician is arguably more the former than the latter, as these six compositions are inspired by a fable-like tale of Hoenig's design, without overt musical continuity. But for the liner notes describing the narrative as it unfolds—an evil magician entices a panhandling pauper to enter his wicked realm—it would be nigh impossible to intuit the pauper's (mis) adventures from the music, but does that really matter? Just as Modest Mussorgsky's Pictures at an Exhibition (1874) stands alone without Victor Hartmann's paintings—few of which survive—so too, the music here stands on its own merits.

It's been five long years since Hoenig's previous release, Lines of Oppression (2011) but the gap only accentuates the growth in Hoenig's composing and the primacy he places on group cohesion over individual displays. A fine group it is too, with long-standing collaborators Orlando le Fleming and Gilad Hekselman joined by Shai Maestro and Tivon Pennicott—team players all. The quintet chemistry sparkles from the first martial drum beats and pristine guitar motif of the title track, an episodic tour de force where beautiful melodies, striking unison motifs and rising-falling ensemble patterns cast a potent spell. Pennicott and Hoenig lay down early solo markers but it's the dramatic compositional arc that most impresses.

The boppish head, the all-but unaccompanied drum solo, and the fast-walking bass lines that intermittently punctuate "I'll Think About It" represent something of a stylistic anomaly in the context of the record as a whole, where more complex overlapping contours are very much the norm. Hoenig's writing is much more expansive on "The Other," where heady, swirling guitar and saxophone lines frame Maestro's solo, which veers between punchy chordal progressions and elegant flowing runs. The gorgeous ensuing guitar/saxophone melody ushers in a sublime passage, where piano and guitar shine before a thumping riff of industrial persistence and menacing tone muscles in, providing a thrilling finale.

Contrastingly, the charming slower number "Lyric" is a mosaic of melodious solos, with Hekselman's—eloquent, articulate and caressing—the pick of the bunch. With five albums as leader to his name and recording credits with Anat Cohen and Esperanza Spalding, Hekselman has, with little fanfare, carved out a place on a crowded scene as one of the most promising guitarists of his generation, one with an ever-more distinctive voice. The guitarist's nuanced comping, wispy and sighing, underpins gently seductive playing from Maestro, Le Fleming and Pennicott on the tender ballad "Alana." The cheery old chestnut "You are my Sunshine" features the melodic drumming that's a feature of Hoenig's live shows, rounding an impressive set off with a bit of low-key fun.

Half a decade may seem like a long gap between recordings, particularly for a musician and composer of Hoenig's talents. Then again, if the mesmeric music on The Pauper and the Magician is anything to go by, then there's clearly something to be said for guarding silence until inspiration—or magic—strikes. One of Hoenig's finest to date.

The Pauper and the Magician; I’ll Think About It; The Other; Lyric; Alana; You Are My Sunshine.