Quin Kirchner: The Other Side of Time 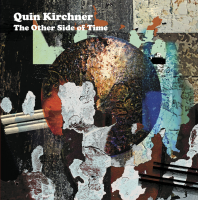 Albums that clock in at anything near 90 minutes are not automatically major works. On the other hand, this new effort from Quin Kirchner and Co. is hard to describe in any other terms. Kirchner's six-piece band has delivered a wide-ranging, powerful disc.

Things get rolling with the appropriately titled "Ritual." From the start, tenor saxophonist Nate LePine will have you reminiscing about John Coltrane's glory days and his multitude of followers. It is a huge, phat track loaded with soul. Kirchner has penned a monster.

It's hard to believe that this opens his first album as a band leader. Kirchner earned his chops in Chicago as a sideman with a long list that includes Jeb Bishop, Greg Ward, Paul Giallorenzo, Bill MacKay, Ryley Walker, Rob Clearfield, Dave Miller, Nick Mazzarella, Nate LePine, Dave McDonnell and Keefe Jackson. He's also been a member of blink., Health&Beauty, Nomo, In Tall Buildings and Wild Belle. I asked Kirchner how all these partners have contributed to what he does.

"When I was young and starting out in New Orleans, I was just trying to make some semblance of a living as a musician," he says. "You want to do creative things and develop your artistic voice. But you also need to get gigs that pay, which means being flexible and versatile. I've always set out to be well-versed in all styles and it has really influenced my voice and informed how I play."

Certainly the album covers a lot of ground. "Together We Can Explore the Furthest Beyond" is a complex, thoughtful ballad. "Armageddon" is pure avant-garde. "Drums & Tines Pt 1" is hardly a jazz piece at all, lacking as it does a single brass instrument. Man, does it groove though. Part 2 is equally solid.

"The 'Drums & Tines' cuts come out of my time playing music with Elliot Bergman in NOMO, Wild Belle and Metal Tongues," says Kirchner. "The electric kalimba I play on those tracks is one from our kalimba building sessions in 2009 ... Those tracks are sort of an homage to that part of my style which developed a lot on the road with those bands."

Kirchner says Jeb Bishop, with whom he worked as part of a double quartet, is an important influence. "It opened my eyes to what you can do with long-form compositions."

That format shines brightest on The Other Side of Time. Not since Kamasi Washington's Epic has a new bandleader come out of the gate in this kind of form.

Strong enough to take a stab at Sun Ra's "Brainville." It is not the album's best. It's a respectful, well-performed tribute. But the band's personality takes a back seat to their hero, and it shows. The swing is nice, but it's not really them.

"Anyone playing adventurous improvisational music owes a lot to Sun Ra," says Kirchner. "His influence and worldview (or universe-view) continue to open up new possibilities in the music."

The band's take on two Charles Mingus pieces—"The Shoes Of The Fisherman's Wife Are Some Jive Ass Slippers" and "Self Portrait In Three Colors"—is more in keeping with what makes the full album work so well. The performances are superb.

There is material on this album that dates back a decade. Other pieces are brand new. It is of course the luxury of a debut album that you have your whole life to prepare it. But given the depth of this work, a sophomore jinx seems unlikely.

Title: The Other Side of Time | Year Released: 2018 | Record Label: Astral Spirits