By Friedrich Kunzmann
January 31, 2018
Sign in to view read count 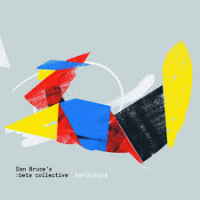 In the ever-growing scene of jazz-guitar today it is getting harder to distinguish oneself from the rest of the crowd. When taking a look around current stirrings in jazz, the guitar seems to be experiencing a renaissance as the main vehicle in the genre-new formations with the instrument at their core emerging all over the globe. Like Mike Moreno, Lage Lund, Matthew Stevens or Gilad Hekselman—to name a few—Ohio-based Daniel Bruce is among those musicians searching to establish a proper voice that can prevail in this overcrowded niche. It lies within the variables of tone, technique, production and composition, that the artist develops and ultimately defines his personal approach and can consequently stick out from the mass.

While certainly all of the above mentioned elements receive a personalized and unique treatment on Earthshine, it is most of all the compositional aspect, that makes this collective's offering a truly special one.

Supported by an all-Chicago-based cast consolidated in the Beta Collective, Bruce displays a versatile set of compositions that demonstrate high virtuosity of all involved in a most sophisticated context. Despite the omnipresence of the leader, Earthshine sees the group arranged in democratic fashion—each member playing a crucial role in crafting this autonomous and harmonious entity of a record. The rhythm section, comprised of Clark Sommers on bass, Rob Clearfield on keyboard and Jon Deitemyer handling the sticks, holds a tight and dynamic foundation, compellingly enabling the soloists to sway in harmony. Apart from the leader himself, brass players Russ Johnson and Chris Madsen embody said soloists and melodically flourish in extensive compositions such as the opening title song "Earthshine" or the closing "Greatest Hit #1."

The former opens the album with a most melodious exposition. An expressive melody carried by trumpet and sax gives way to a broad harmonic progression that ends in a concise ostinato. The presented material subsequently experiences much development, which reveals itself in harmonic substitutions as well as melodic imitation, diminution and augmentation. Bruce doesn't hesitate long and takes the lead, bubbling up smooth lines over steady harmonic changes. Not unlike that of many of his contemporaries, his guitar tone is thick in tone and low in attack, making for seemingly effortless fluid runs à la post-Metheny Berklee School. The sweetness in tone is applied not only to the timbre of his guitar but reflects the general production of the record, culminating to an easy listen when spinning in the background while at the same time impressively intricate when payed closer attention to.

The highly dynamic base established by all involved becomes especially apparent on bluesy "Reprieve:Reprise." Built around a simple melodic line over a sequencing circle-progression, the piece reveals a sparse arrangement, giving bassist Clark Sommers the freedom for more syncopated accompaniment. He furthermore uses this opportunity for a poignant solo, that tastefully contrasts the proceeding guitar lines by means of pace and phraseology. Having released both Parts Unknown in collaboration with John Mclean and his own By A Thread in 2017, Earthshine sees the long time Kurt Elling backer wrapping up a most productive year in exquisite fashion.

While remarkable throughout the entire record, Jon Deitemyer's vigorous drumming—characterized by very subtle rhythmic changes brought on by shifting emphasis of on-and off-beats—is most striking on "Lapse." Alternating between various rhythmic patterns, Deitemyer lays out straight and reserved meters that slowly build up to a climaxing groove, encapsulating one of Bruce's more extroverted solos with the necessary edge. The compelling nature of his drumming also derives from a steady adoption of ghost notes.

Emphasized by the dynamic playing of a cast of musicians who share an unmatchable chemistry, the intricacy of Dan Bruce's compositions evolves to a natural state, that doesn't challenge, but enchants the listener in a mesmerizing manner. At first it may prove a challenge to stay focused and not be carried away by the sweetness of it all. The overall sound is drenched in such subtle dynamics and compositional shifts, making it difficult to grasp the level of detail that is of essence to the big picture. But after a second or third glance this oeuvre unveils a special refinement that does indeed prevail in an already enticing year.

Earthshine is a unique offering that can be savored with patience and special attention just as well as in the background. To craft this versatility in such homogeneous context is a rare art, that Dan Bruce has clearly mastered.