By Mark Corroto
November 2, 2012
Sign in to view read count 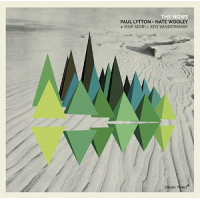 Consider the great duos of the cinema, Spencer Tracy and Katharine Hepburn, Dean Martin and Jerry Lewis, Bruce Willis and Samuel L. Jackson and so on-what each successful duo has in common, is a chemistry, an attraction or spark between them. Such is the case with the musical duo of percussionist Paul Lytton and trumpeter Nate Wooley.

What each of those film stars also has, is individual talent capable of starring in a lead role sans partner. Likewise, Lytton and Wooley (his junior by some 27 years) are masters of their own instruments. Lytton was a force behind the London free jazz scene of the 1960s, he founded the London Music Collective with (among others) Evan Parker and Derek Bailey. His drums can be heard behind groups led by Barry Guy and the American leader Ken Vandermark. Wooley's trumpet is seemingly ubiquitous these days, in his quintet, solo performance, with groups led by Joe Morris or Mary Halvorson and in duo with Peter Evans. As with any fantastic partnership though, Lytton and Wooley always seem to raise their game when they are performing together.

This album was recorded during their 2011 US tour, Disc One was recorded at New York's The Stone and Disc Two at the Hideout in Chicago. The session follows the duo recordings Creek Above 33 (Psi, 2010) and, like their recordings with guests The Seven Storey Mountain (Important, 2009) (with David Grubbs) and Six Feet Under (No Business, 2012) (with Christian Weber) the duo share the stage for half the discs in NY with Ikue Mori and Ken Vandermark in Chicago.

Usually, extended technique -a gift both musicians share-is a recipe for a disjointed sound and an impulse killer. With Lytton and Wooley though, the opposite is true. The trumpeter's amplified growl and roar and his slurred shouts heighten the cymbal accents and drum traumas of Lytton. This disc, like their previous one never lacks for momentum. The pair play off each other's sounds, Lytton the scrambled eggs of metal-on-metal and Wooley the over-blown amplification of his horn.

Adding Mori to mix up the electronics, Lytton and Wooley morph into to the duo of R2-D2 and C-3PO, crafting their conversation into a sci-fi dream. The balance of this duo doesn't so much shift towards Mori's computer electronics, as much as it makes room for her voice. Likewise, with Vandermark's horns. He supplies the repetitive pulse on "The Ripple Effect" with his baritone saxophone, enabling the duo to sculpt a freer sound. The track "Automatic" finds Vandermark blowing bass clarinet notes and Wooley following with some traditional trumpet accompaniment while Lytton whips up the energy.

This fantastic duo is a perfect host to their guests, but certainly they are an act unto themselves.