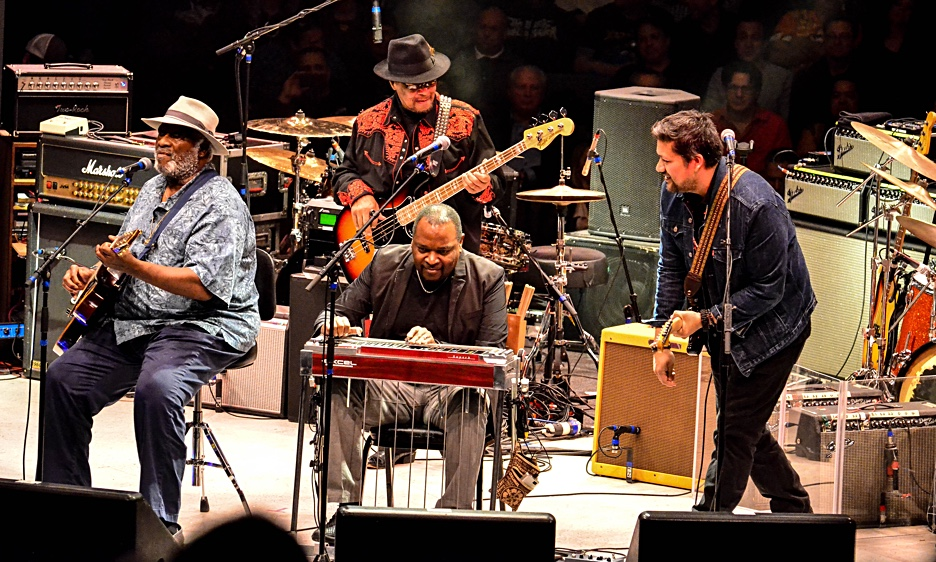 Many describe Jimi Hendrix as the "GOAT" of the electric guitar—the greatest of all-time; the greatest and most influential guitarist who ever lived. James Marshall "Jimi" Hendrix was born Johnny Allen Hendrix in 1942. The rock guitarist, singer, and songwriter's mainstream/solo career was short— from 1967 until his untimely passing in September 1970.

Hendrix was born in Seattle, WA and began playing guitar when he was 15-years-old. He enlisted in the U.S. army in 1961. After receiving an honorable discharge in 1962, Hendrix moved to Clarksville, TN and began playing on the Chitlin' Circuit, backing Curtis Knight & the Squires, the Isley Brothers and Little Richard. In late 1966 he moved to England and formed the Jimi Hendrix Experience with drummer Mitch Mitchell, and bassist Noel Redding. Almost immediately the band achieved fame by placing three songs in the UK Top 10 Singles chart—a cover of the Leaves' "Hey Joe," along with his original compositions "Purple Haze" and "The Wind Cries Mary."

The Jimi Hendrix Experience performed at the Monterey Pop Festival in 1967. In 1968, Hendrix released Electric Ladyland (Reprise Records), his third and final studio album. The album reached number one in the US. In 1969, he headlined the Woodstock Festival.

Beginning in April 1970, Hendrix, Mitchell, and bassist Billy Cox performed and recorded together until Hendrix's death. This trio was often billed as the Jimi Hendrix Experience and headlined the Isle of Wight Festival in 1970. In 1970 Hendrix, along with Cox on bass and Buddy Miles on drums, recorded the live Band of Gypsies (Capitol Records) album which was released on March 25, 1970.

Hendrix's sound was a mixture of electric blues and straight-up rock 'n' roll. He used various effects such as fuzz tone, wah-wah, distortion and feedback which was delivered through large amplifiers with high volume and gain. He is credited with being the first artist to use stereo phasing effects in his recordings.

Hendrix received many awards both during his lifetime and posthumously. In 1967, readers of Melody Maker voted him the Pop Musician of the Year. In 1968, Rolling Stone declared him the Performer of the Year. In 1970, Guitar Player named him the Rock Guitarist of the Year. The Jimi Hendrix Experience was inducted into the Rock 'n' Roll Hall of Fame in 1992. Rolling Stone ranked Are You Experienced (Track Records, 1967), Axis: Bold As Love (Track Records, 1967), and Electric Ladyland, among the 100 greatest albums of all time. The magazine also ranked Hendrix as the greatest guitarist and the sixth greatest artist of all time.

In addition to the three songs which first brought him to prominence in 1967, Hendrix is best known for the tunes "Fire," his cover of Bob Dylan's "All Along The Watchtower," "Stone Free," "Little Wing," "Spanish Castle Magic," "If 6 Was 9," "Manic Depression," "Burning of the Midnight Lamp," "Red House," "Can You See Me" and "Foxy Lady."

The Experience Hendrix Tour which features a number of top musicians paying tribute to Jimi Hendrix and his legacy has basically been an annual event since 2008. On Thursday March 28th, the 2019 version of the tribute tour made its way to Westbury, NY's intimate NYCB Theatre, where the spirit of the '60s was alive in the parking lot as audience members tailgated and shared their barbeque foods, vendors hawked various Hendrix t-shirts and more than a few "entrepreneurs" were offering magic mushrooms and other indulgences.

On this evening the intimate venue was configured "in the round" which means that the small stage at its center would revolve slowly as the band members shuttle on and off the stage for the entirely of the evening's performance. This would allow the multi-generational audience members to see the concert from a number of different angles. The show began when Jimi's step-sister, Janie Hendrix, the president and CEO of Experience Hendrix, was introduced. She explained that the evening (Jimi's famous "electric church concept") would be split into two sets with an intermission in the middle.

The unrelenting guitar attack of an evening began with a stellar version of "Freedom," performed by Cox (who also provided vocals), Zappa, Brown and Layton. Musicians and vocalists were led to and from the stage throughout the performance. During the majority of the show, the drums were manned by Layton while the bass duties would be handled either by Cox or McCormack while the guitarists mixed and matched their way through some of Hendrix's best loved songs. Highlights included Eric Johnson's version of "Are You Experienced," Lang delivering a fantastic vocal "All Along the Watchtower" and "The Wind Cries Mary," Mustaine playing with Lang on "Spanish Castle Magic" and "Fire" (prior to which he stated that it was "time to speed things up"). The first set ended with Mustaine on lead guitar playing alongside Cox, Nanji, McCormick and Layton on a powerful version of "Stone Free" as sung by Brown.

After a fifteen minute intermission during which many audience members made their way to the merchandise stand and/or the concession/bar area, the second set began with the introduction of Taj Mahal. The 76-year-old, soon to be 77-year-old, bluesman appeared clutching his acoustic guitar with an electric pick-up. He sat on the stool provided for him, plugged-in and led the band (which for these tunes included Cooke and Campbell) through an amazing, awe-inspiring three-song mini set of classics: Howlin' Wolf's "Killing Floor," Robert Petway's "Catfish Blues" and "Hey Joe."

Other highlights of the second set included Cooke and Campbell playing steel guitar on "Red House" and Brown's lead vocal on Buddy Miles' "Them Changes" (which featured Lang, Cox, Campbell, Nanji, and Layton). The biggest highlight was the evening's most anticipated performance which featured Westbury's native son, Satriani, on guitar, Pinnick on bass and Aronoff on drums. This trio was joined by Brown on vocals for "Crosstown Traffic." Then it was the trio's turn to rock out on "Manic Depression," "I Don't Live Today," "If 6 Was 9," "Third Stone from the Sun/Machine Gun" and a night-closing and astounding version of "Voodoo Child (Slight Return)." The trio was so tight, so professional and so good together that Satriani, Pinnick and Aronoff should give some serious thought to recording its own album.

After the applause had subsided following "Voodoo Child," each of the performers made their way to the stage for the final bows. The audience which had risen to its feet while Satriani, Pinnick and Aronoff were knocking it out of the park, stayed standing and continued to cheer pleading for one more song— perhaps for a group jam. The crowd members cajoled, whistled, clapped and raised their cellphones with the flashlight feature on (as though one would with a lighter back when Hendrix himself was performing these iconic songs) hoping for more. Unfortunately it was almost 11pm and curfew laws would not allow for more.

Satiated, but not completely satisfied (they clearly wanted more), the audience members shuffled toward the lobby where they bought t-shirts, caps, vinyl records, CDs, posters, keychains and anything that the Experience Hendrix marketing machine made available for purchase. Marketing machines and retail therapy have their place in the word of the tribute tour, but it is the music that, rightfully, took its place at the center of the spinning stage. The evening's performances would have made Hendrix proud. His legacy and musical canon will continue to excite and inspire both aspiring musicians and professionals to delve deep inside themselves to see what they are capable of and create their own "electric churches."