By Bruce Lindsay
February 16, 2015
Sign in to view read count 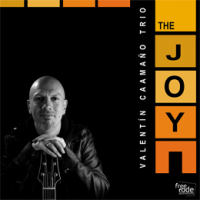 Sometimes album titles have an air of mystery, an enigmatic collection of words that seemingly bear no relevance to anything, especially the music. No such problem with The Joy, from the Valentin Caamaño Trio. From the cheerily welcoming swing of Charlie Parker's "Yardbird Suite" to the relaxed beauty of Thelonious Monk's "Pannonica" this is an album that, to paraphrase Lord Byron and Otis B Driftwood, lets joy be unconfined.

On The Joy guitarist Caamaño, from Santiago de Compostela in Spain, is joined by bassist Alfonso Calvo and drummer LAR Legido. Caamaño predominantly plays single note runs rather than chords, Legido favors brushes over sticks: the result is a calm and uncluttered feel that gives plenty of space for the individual voices of the three instruments.

Caamaño's track list holds no surprises for lovers of bebop and its descendants. These are all tried and true classics, well-known but open to seemingly infinite reworkings, variations and interpretations. The trio makes no attempt to radically alter these much-loved numbers. Instead, the musicians choose to let their versions center round the familiar melodies, from which Caamaño, Calvo and occasionally Legido branch off with solos.

The trio's take on Gigi Grice's "Minority" is upbeat and swift: it also features a rare Legido solo. Sonny Rollins' "Tenor Madness" is another swinger, driven by Legido's brushes and also giving the drummer another chance to take the spotlight as he trades fours with the guitar. Monk's second tune, "Well You Needn't," builds on Calvo's confident and jaunty walking bass: the trio's interpretation emphasises the tune's groove and immediacy, a gently funky treatment that closes the album on a high.

The Joy is a pretty old-school affair: three musicians and friends revelling in the chance to put their own stamps on some well-chosen standards while retaining the tunes' familiar melodies. All three players transmit a sense of fun and enjoyment—the performances sound spontaneous, fresh and energetic. They could be in a studio, they could equally be in the corner of a bar, or greeting the dawn after a late night party. The result is an album that's a pleasure to hear. Byron and Driftwood, both up for a party in their own ways, would surely approve.