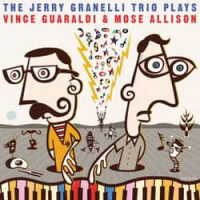 Granelli possesses deep personal insight into both principals. He landed in the drum chair in Vince Guaraldi's trio just as the title track to the pianist's 1962 landmark Cast Your Fate to the Wind was breaking out in the US singles charts and remained for three momentous years, contributing to Guaraldi's celebrated early Peanuts television specials and recordings with Brazilian guitarist Bola Sete.

Granelli subsequently served for nearly four decades as Mose Allison's drummer, jumping in to help the blues buddha record his landmark Your Mind is On Vacation (1976, Atlantic) and providing the steady heartbeat for Allison's blues musing until the composer passed in 2016. "Mose was like the Charles Ives of the blues," Granelli recalls. "He would take the blues as far out as he could, and he became one of the great influences in American songwriting.

"We all love the blues, whether we play them all the time or not, and we all love great songs—and these are really great songs."

It's simply remarkable that even just the opening notes to "Cast Your Fate" still cast such a haunting and evocative spell, more than merely beautiful, with Granelli, Jones and Saft all finding new pictures to paint in Guaraldi's familiar colors.

Then this set turns most thoroughly and magically blue. The trio stretches "Parchman Farm" across eight skintight minutes, their roaring musical monster eventually growing three distinct instrumental heads: Jones' bass throbbing like a blues toothache, Granelli's bass and snare drums treacherously bombing the beat, and Saft dropping in familiar blues lines and shapes but not in the places or times you're used to hearing them, splattering blue color and sound like an impressionist Ramsey Lewis. Saft and Granelli especially bootstomp through "Your Mind is on Vacation," too, with Saft slamming chords out so hard they seem to turn brittle and shatter off the black and white ivories, and Granelli laying just behind the beat to rock a funky, almost boogaloo, sound. "Parchman Farm" and "Vacation" rock hard but they're nowhere near rock 'n' roll.

Saft softly steers "Star Song" to the edge of Bill Evans' kaleidoscopic and reflective sound, copping nods to "Moon River" and "The Christmas Song" along his way while the rhythm section swings it like a jazz samba. This set ends with the bright and childlike strains of "Christmas Time is Here" ringing deliciously in your ears.

A lot of music that comes out on the Rare Noise label can go over my head in concept or sound, but Plays Vince Guaraldi & Mose Allison lands squarely in the mind and heart.