By Doug Collette
January 16, 2021
Sign in to view read count 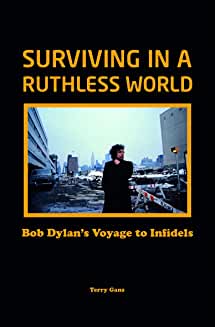 Terry Gans' Surviving in a Ruthless World: Bob Dylan's Voyage to Infidels is an in-depth examination of Bob Dylan's Infidels (Columbia, 1983) album, the title of the book taken from the original name for the album. The author covers the gestation of the record all the way from the Nobel Laureate's composing as he sailed the Caribbean in his boat to the earliest arrangements for a producer—Dire Straits' Mark Knopfler got the nod over Frank Zappa, David Bowie and Elvis Costello—then the selection of a studio location (The Power Station in New York City) and finally on into the choice of accompanying musicians, the diversity of which features the Jamaican rhythm section of drummer Sly Dunbar and bassist Robbie Shakespeare and one-time The Rolling Stones' guitarist Mick Taylor.

Gans' meticulous research also allows him to include track-by-track dissection of all sixteen songs considered for the LP, not just the final eight, as well as more than a little insight into the sequence of events involved in the original recording sessions as well as the extensive overdubbing and mixing of the music for its subsequent release. The granular detail that arises in this inspection of the one-time voice of a generation's exodus from his so-called gospel years (carefully delineated in Clinton Heylin's Trouble In Mind: Bob Dylan's Gospel Years -What Really Happened (Lesser Gods, 2017) may only hold the attention of the most abiding Bob Dylan devotee, but there is nevertheless plenty to fascinate the aficionado and even perhaps the casual fan.

In fact, the writer's illuminating insights into The Bob Dylan Archives may be the most thought-provoking information included in these two-hundred-sixty some pages. The process by which Terry Gans gained access to the vault located in Tulsa Oklahoma, however, is less engrossing than how he utilized the treasure trove of written notes and recordings to assemble such a plethora of information and thus shed light on the creative process by which this twenty-second studio album of The Bard's came to be. This long-time scholar of the iconic singer-songwriter offers plenty for the reader to ruminate upon, even if he refuses to speculate overmuch on the details he discovers.

That clear declaration of intent, however, can prove frustrating by the time the fitful story reaches its conclusion. For instance, despite the profession of illuminating interviews, Gans' explanation of the timeline involved in completing Infidels doesn't directly address why Knopfler never returns to the work following a commitment to a tour with his group; granted, the vocalist/guitarist/songwriter is the co-producer of the record with Dylan himself, but he is conspicuous in his absence as a subject of subsequent conversation with the writer, who, in various methods of communication including on-line and email, does speak with various personages including engineers and musicians directly involved in the various aspects of the project).

Equally puzzling, if not more so, is Terry Gans' track-by-track breakdown of the individual numbers, in part because his own opinions are few and far between (though deliberately so by his own admission). The bane of convention record reviews is no less enervating in this broader context, largely because this approach doesn't conjure any 'you are there' sense of the action on numbers such as "Jokerman." On the contrary, it almost fully and completely demystifies the artistic process in action, rendering it so mundane it becomes enervating to follow the (d)evolution of the germination and elaboration of this singular artistic endeavor. It is indeed fortuitous that Bob Dylan works in such a strange and cryptic fashion as he writes and records to his own satisfaction (or lack thereof): in purely objective terms, it's fair to say no one, even the artist himself, could definitively explain how it was done.

The inclusion of complete and 'authorized' lyrics to all the songs (plus odd variants thereof) redeems this section. Nevertheless, by the time this portion of ...Bob Dylan's Voyage to Infidels gives way to arguable ephemera on the videos derived from the music, it's well-nigh irresistible for the most curious reader to apply the precept of 'Occam's Razor' (...that the simplest of competing theories be preferred to the more complex...) to the final decisions involving inclusion and exclusion of content. It may just be that, no matter how deeply moved Terry Gans is (and by extension so many of those who have also heard them) by the various recordings of "Blind Willie McTell" and "Foot of Pride," it may simply be the artist himself wasn't satisfied with how those various cuts sound(ed) compared to his vision for them.

In regards to the end result of what came to be Infidels, Terry Gans is wise in considering the relatively mundane aspect of the time factor involved in the marketing schedule for release of the record. Therein lies a subtext in which appears the late impresario (purportedly Dylan's manager?) Bill Graham. Yet, in another mystifying aspects of the author's otherwise sternly academic focus, there is no record of contact from the Columbia Records label. This writer/fan may not be an all-around stellar investigative journalist, but the sum total of all the essential facts and minutiae he gathers together within these hardcovers is still, ripe fodder for distillation into the most pertinent verbiage to accompany an entry into the ongoing Bob Dylan archival campaign The Bootleg Series devoted to Infidels.

Terry Gans' passion for his subject, in fact, certainly sounds sufficient to ignite such a project. Failing that, he might consider additional efforts along the lines of Surviving In A Ruthless World devoted to other items in the Nobel Laureate's discography (the Daniel Lanois-produced Oh Mercy (Columbia, 1989) would be a prime choice). While revelations therein might be as few and far between as here, the source material itself at least remains endlessly captivating.