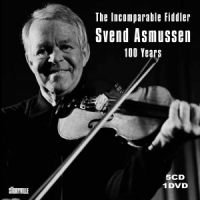 Danish violinist Svend Asmussen this year celebrates his 100th birthday. This boxed set of five CDs and one DVD looks back on a career in jazz that started in 1933 at Copenhagen's Apollo Theater, when "the Fiddling Viking" was just 17, full of youthful confidence and fronting his own quartet.

Four years later the much grander Svend Asmussen Dance Orchestra made its recording debut with the two tracks that open CD1, "Jazz Potpourris 1 and 2." It was the success of these records that persuaded Asmussen to abandon plans to become a sculptor and make music his profession.

Conscious of the need to balance his love of jazz with commercial success, his repertoire included such embarrassingly dated and eminently forgettable items as "The Booglie Wooglie Piggie" included here alongside two Gershwin medleys, and more importantly Duke Ellington's "It Don't Mean A Thing" and Ray Noble's Cherokee.

All of it seems very long ago and far away. So too CD2 which kicks off with an equally embarrassing improvised vocal by Asmussen of Sammy Kahn's "Rhythm Is Our Business." There's also a saccharine treatment of Gershwin's "Someone To Watch Over Me."

It's not until CD3 on which Asmussen teams up with French violinist Stephane Grappelli that the uncommitted listener begins to understand the force he was in his day. The two first met in Paris in 1939 in a bizarre encounter with Django Reinhardt. In skittish mood, the gypsy guitarist insisted that he and Asmussen switch instruments and Grappelli play piano. Not surprisingly, nothing came of the session.

But the 1964/65 get-together with Grappelli was a very different kettle of fish. It features some fine, creative swing, with Asmussen playing a tenor violin, tuned an octave lower than the Frenchman's instrument, on his own "So Sorry," Grappelli's "Love Is Back" and a far more palatable version of "Someone To Watch Over Me.

CD4 sees Asmussen teaming up with the great American jazz violinist Stuff Smith. The opener features a knockabout duet between the two on "Duke's Place," the vocal version of Ellington's "C Jam Blues." The first four tracks were recorded at Danish Radio's Copenhagen HQ before an enthusiastic audience, the rest with a French trio and sans Smith 20 years later at a gig in Paris.

By CD5 Asmussen has turned 80 and is still going strong, playing live in Sweden and Denmark with a trio featuring the excellent Danish guitarist Jacob Fischer, who contributes an original, "Latino." In the main Asmussen revisits old favourites. Ellington is well represented, with versions of "The Mooche" and "Prelude To A Kiss" plus quotes from other Ducal numbers in a lovely, laid-back version of "Bye Bye Blackbird."

Things get off to a rollicking start with Ellington's "It Don't Mean A Thing If It Ain't Got That Swing." Then, with "Lapp Nils Polska," Asmussen doffs his hat simultaneously to the song's composer, Swedish Sami violinist Nils Jonsson and Jan Johansson, the great Swedish pianist, who popularized it with jazz audiences. Sonny Rollins' "Pent Up House" is an interesting inclusion.

Today, recovering from partial paralysis caused by a blood clot, Asmussen plays only privately but Kjeld Frandsen, author of the informative booklet accompanying the package, has heard him "live" and says his musical curiosity is "completely intact."