A giant, three-pound onion ring keeps growing. "Now, it's four pounds!" says the announcer. "It seemed like an overly heavy onion blossom," musician Angela Sawyer said. "It was in a cartoon on Adult Swim in 2002. It was called 'Sea Lab 2021.' It was a remake of an older cartoon and it was very flippant. And they used to have fake commercial breaks. One of them made fun of Applebee's." Angela's forgotten what they called it, but she gave it her own name, "The Grizzler." "Grizzle" happens to be master alto saxophonist Dave Gross' nickname. It was only natural, when Gross asked Sawyer to come up with a name for his pioneering, entirely free big band, that she would come up with "Grizzler," a name that has indeed stuck, as the band itself has. 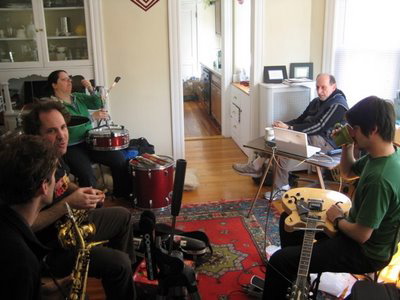 Sawyer is the point woman for The Grizzler Big Band. Over its two-year history, it has had its ups and downs, its ins and outs: in particular, one of its great virtues has been to blur the line between inside and outside art. Its performances, featuring the best of both new and experienced local artists, had their gems and also their fatal flaws. No one ever really knew if they would be a success in conventional terms in the long run. It was the perception that their role was other than, arguably greater than, perpetuating an ideal of aesthetic success.

On Friday night, November 12, 2010, Grizzler perfected its formula—anti-formula, to speak accurately. The 13 piece ensemble made a series of plays, putting the ball into the end zone for a touchdown, and then more, for an ultimate chalk-up in the winning column. Andrew Eisenberg (known to All About Jazz readers as Flandrew Fleisenberg) hosted the event at his Fort Point Channel loft in South Boston. Andrew has a heart the size of Eric Dolphy's , which he put into his percussion work in the performance, which happened to fall on his birthday. The night was divided into six segments: four small-group pieces book-ended by two full ensemble recitals.

"Grizzler is a fun show to see," said audience member Josh Harris. "You never know exactly what it's going to be. It's what I like about improv. Everyone in the band has certain areas they work in, but I feel like everybody, when they're working in Grizzler tries to bring something outside of their normal vernacular into the pieces, which makes it interesting and exciting." He continues: "There are so many people that they're not all going necessarily to pair off into smaller groupings, so you hear duets from people you wouldn't likely hear duets from otherwise." There are micro-units within the larger. Does it always work? "I think so, more times than logic would dictate. And they set so many new boundaries for themselves, that they really can do anything in the context of the ensemble."

Grizzler has contained utter neophytes, but also veterans and legends. Jed Speare is an electronics artist and member of Grizzler. His Cable Car Soundscapes (Folkways, 1982) is a classic of the field-recording genre. In the night's performance, he played laptop computer, one of the few non-acoustic contributions. However, he managed to produce sounds that blended seamlessly with the latter, sometimes even sounding uncannily like a bass clarinet. "My sounds originate from field recordings," said Speare. "To a greater or lesser degree I work on them and then I put them out. By the time they're out there, I don't remember the origin. The transformation of sound is also a self-transformation."

Michael Rosenstein is a veteran jazz critic, now associated with the publication Signal to Noise. Tonight was his debut as a musician. In addition to playing both full ensembles, he performed in the third small group. He played a prepared electric bass laid on a table. "I was basically trying to think about how to play off of what people were doing, and then play against it at the same time, being conscious of trying to find similar timbres to what [snare drummer] Jack Callahan was doing, taking what was the acoustic nature of what he was doing and tweaking that and cracking it a little bit with the electro-acoustic stuff; and then thinking what [trumpeter] Forbes Graham was doing with craft, and more staccato broken things—and fitting what I was doing in around that as well."

Steve Norton was a member of the classic '80s-90s ensemble Debris, which pioneered the use of serialism in improvised contexts. In addition to Baritone and alto saxophones, and a bass clarinet, his collection of bells included a 110-year-old tambourine, which belonged to his wife's great-grandmother. Shouldn't it be auctioned off at Sotheby's? "It should be pressed into use..." And Lou Bunk, a young composer in the field of concert new music, had this to say: "The work that I do as a free improviser affects my writing as a composer. They're different processes but they blend together."

Violinist Morgan Evans-Weiler also made his debut with Grizzler tonight. Evans-Weiler is a recent addition to the Boston scene, and situates himself wisely in this regard, not afraid to play "second fiddle," a thing he does so well in fact, as in a recent performance with Julius Vasylenko, that he ends up becoming a star in his own right. He was a master of dynamics: "harmonics, upper harmonics, parts that came out accidentally. I pluck the strings with both left and right hands. My first time with the group I was just trying to feel it out, trying to get comfortable...I was trying to add to the texture." 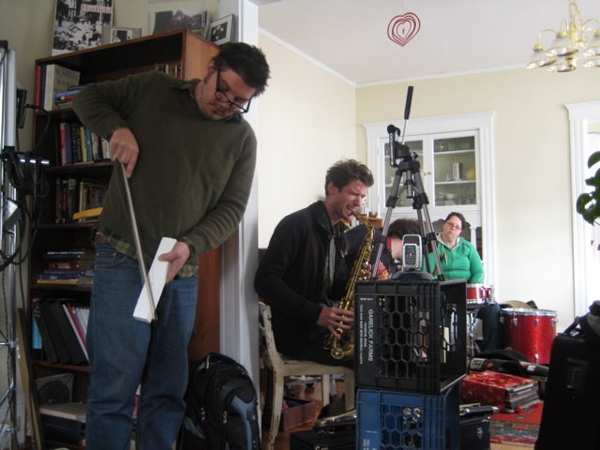 Jack Callahan teed off the first ensemble, in the literal context of the football metaphor, playing center to Gross' quarterback. As Gross, the leader simply watched and monitored to start, Callahan scraped his snare drum with circular motions with a table fork, producing the steady sounds that established the particular "moderate" quality that comely young audience member Katt Rios remarked on. "No one was going off in their own direction," she explained. Indeed, they played as a team, exercising control in all things.

A peaceful hum evolved, growing and getting louder, without becoming noisy. Norton broached it with a jazzy melodic note string on his baritone sax, and Sawyer, in effect—and effectively, initiated a duet with him with her voice—one she has learned to take so seriously that at this point, to these ears, at its best moments, it has the quality of an opera diva's. Gross himself poked in occasionally on his alto sax, but for the most part he was the facilitator and enabler, like Moses parting the waters. The horns rose and fell like children on a merry-go-round. Veteran composer Lou Cohen, an authority and one-time student of John Cage, played against type tonight, going from his usual sublime to the ridiculous of playing Nintendo video controls, getting loopy sounds out of them, lifting the ensemble into new dimensions.

After a break, the first small group took center stage, consisting of Vasylenko on bamboo sax and Sawyer again singing and breathing through duck calls. Vasylenko took off with some high pitches, to which Sawyer sounded her call like a rubber duck being squeezed. Vasylenko breathed heavily through the mouthpiece and cackled, Sawyer changing the pace with an operatic trill. Toward the end, it was hard to tell call from voice, and Vasylenko himself sounded like a bleating, battering ram.

The duo picked up for an encore, initiated by Sawyer, on a Khaen, a Thai country instrument sounding like a harmonica with a breathy drone. Vasylekno produced a soft whistle on bamboo, with intermittent squeaks. It was a nice drone piece overall, with a twist of ginger or lime, and a funky yodel from Sawyer through the duck call—and a final radical change to mutual counterpoint counterattacks.

Set Three began with watery bleeps from Speare, and then some sounds like a harpsichord. Eisenberg scratched the floor and then a metal barrel upended, with his drumstick. Gross wailed feebly and Cohen produced an effect of oscillation on his Nintendo thing. Eisenberg then bounced a large coil on the upended barrel, and tapped and flapped stuff, at one point getting up and rubbing the wall with his stick—and then with both sticks. Cohen produced a rumbling sound, to which Speare responded with some ghostly plumbing effects. It all faded out with Eisenberg shaking something in a tin pan. Vasylenko on Gross: "Water dripping in a cave."

Graham constituted the fourth set with Callahan and Rosenstein. He used a Velvetone mute on his trumpet, and pulled his minimalist thing out of his bag of many tricks. Callahan rubbed a cymbal on his snare as Graham whistled through his mouthpiece, which he then reattached to the trumpet body, bubbling and squeaking. Callahan scraped the cymbal with his stick, getting shock sounds, Rosenstein acting as a kind of anti-drone, interrupting the piece and taking it in new directions instead of providing a mellow, steady background. Graham got a sound so big it was like a tuba or a euphonium, with which he produced a line something like "Flight of the Bumblebee." Rosenstein inserted an electronic climax, Calllahan spun his snare like a top—getting his own drone sound—which Rosenstein zapped back at with his electric bass—Graham ending things with a foghorn diapason.

Set Five consisted of Norton, Evans-Weiler, and Bunk on violin. Evans-Weiler's violin was placed on the floor. Things all started out very slow and nice, then got dicey and drastic and spastic—stretched creaks, whispers, body of violin abused but to good effect. Evans-Weiler finally picked up his instrument and played slow trills, with overtones of black cherry, Bunk getting harsh, trashy sounds alternating with classical cadenzas on his. Evans-Weiler sounded like a clock being wound at one point before things literally wound down. 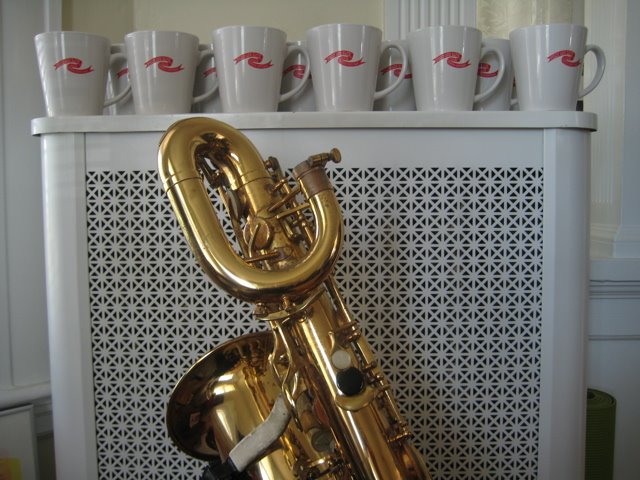 As the final ensemble piece got underway it sounded like a bunch of car horns in a traffic jam all harmonizing on a late summer afternoon. Ersatz Doppler effects abounded, pushing the mind afloat a sea of reverie, a bell from somewhere bringing it back to the present. There were repeated motor sounds and then a lyrical passage led by Sawyer's singing.

Again, this was one to chalk up in the winning column, Sawyer with her superfine voice playing the wide receiver who brought the ball, over and over, into the end zone.