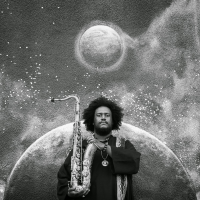 Kamasi Washington's masterwork The Epic showcases an incisive saxophonist/composer who has performed with jazz luminaries Gerald Wilson and Herbie Hancock but is probably better known for his work with creatives outside of jazz—Grammy winning electronic musician/producer Steven Ellison aka Flying Lotus (grand-nephew of Alice Coltrane); rising Compton rapper Kendrick Lamar and Steven Bruner aka Thundercat who is one of the best electronic bassists in any music genre.

Washington's intrepid concepts are in full force in this auspicious project, one that integrates fiercely swinging jazz with R&B, and touch of spiritualism realized by his ten-piece band "The Next Step" with a full string orchestra and full choir. As fresh as anything in recent years The Epic feels like a throwback to the past as it echoes the deep lineage of the likes of Sun Ra, John Coltrane and African American church music. Yet these are informed through the saxophonist's personal experiences growing up in Los Angeles and the surrounding area where he's a member of the musical collective called the "West Coast Get Down."

The first disc is entitled Volume One "The Plan" and its opening piece "Change of the Guard" sets things off to an exhilarating start with hard modal swing, the eddying sounds of the orchestra swirling with the choir's angelic-like voices and aggressive soloing from Washington's burning tenor. There are horn serenades, a fluid bass solo from Thundercat as Washington plays over the choir's wordless chants in "Askim" and a soulful cooldown in "Isabelle" where the organ wafts through the melody supported by a grooved bass line. Add to this the Afro-centric rhythms of "Final Thought" as Washington plays with total abandon delivering John Coltrane-esque sheets of sound and the disc's closing "Rhythmic Changes" which contain an uplifting message sung by vocalist Patrice Quinn.

Volume 2 (The Glorious Tale) and Volume 3 (The Historic Repetition) are equally inspiring. The provocative compositions are denoted by exceptional performances that articulate Washington's "musical daydream" reflecting life's past, present and future. The recording stimulates on multiple levels while revealing that progressive jazz does indeed exist outside of New York City's sphere of influence. These South Central/Los Angeles musicians are serious contenders of the art-form with unfaltering abilities heard in Miles Mosley's acoustic bass bowing in "Miss Understanding" and Cameron Graves's blistering piano in "The Magnificent 7."

And let's not forget Washington's usage of a 20-person choir whose interaction accentuates the music with dramatic arranging and accompaniment like a heavenly host within a jazz ensemble. The recognition that the past is as important as the present is also a factor in Volume 3. "Re Run Home" has old school 1970s funk with wah-wah sound effects; the re-envisioning of Ray Noble's 1938 jazz standard "Cherokee"; a rapturous version of Claude Debussy's piano movement of "Clair de Lune" as well as "Malcom's Theme"—heartfelt music/song rendition of Malcom X's eulogy that was delivered by singer/actor Ossie Davis in February 27, 1965. From start to finish Washington's 172 minute release is appropriately titled and among 2015's best jazz releases.