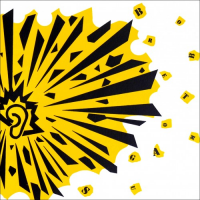 Borbetomagus—Donald Miller on electric guitar, Don Dietrich and Jim Sauter on (tenor) saxophones—have been together since the late 70's. They soon established their own distinctive sound and working methods that suited the unconventional instrumentation and gave the trio a strong identity. With Dietrich and Sauter owing a debt to such free saxophonists as Albert Ayler, John Coltrane (Ascension more than Giant Steps) and Peter Brötzmann, and Miller to Jimi Hendrix as much as Derek Bailey, the three specialised in improvised barrages of sound that were influential in the growth of Noise as a genre (as opposed to plain old-fashioned noise). In concert, they can be quite a spectacle, with the saxophones notoriously playing in close proximity, their horn bells together (see photo, below).

Since 1980, when their first album appeared, the trio have released albums at a steady rate, slowing down somewhat recently. The vast majority of those albums have been live recordings, with their last studio recording dating back to the 80's. In a 2006 Paris Atlantic interview, Dietrich commented, "We've always preferred live recording, but it's always been difficult to get a good one. It's almost as if we're compelled to go into the studio because time and time again our live recordings were shit...." Which leads us nicely to this album...

Recorded in Eastcote Studios, London, in October 2014, as always for Dancing Wayang, the musicians were afforded the time and space to record the music they wanted to, in the way they wanted, without the pressure of time. Playing together, the three were recorded separately so the music could be mixed (by Anna Tjan, Dancing Wayang proprietor). Like the label's previous ten albums, this one is released on limited-edition vinyl in hand screen-printed sleeves; this sleeve is by British sculptor Richard Wilson and, appropriately, features an explosion centred on a human ear, depicted in waspish yellow and black.

The music consists of two extended tracks, each about eighteen minutes long, uncompromisingly entitled "DIS" and "DAT." "DIS" opens to the sound of Miller's guitar buzzing like an angry trapped wasp and intensifies from there. Straight from the off, the musicians' decades playing together are evident; even when all three are playing simultaneously, each with the volume turned up to eleven, they are clearly listening and reacting to one another as the three instruments complement each another, entwining into a complex integrated whole.

Heard in isolation, any ten-second snatch could sound fearsomely impenetrable, but across its entire duration each track reveals depths and subtleties that are unimaginable on first contact. There are peaks and troughs, with the latter seeming to provide the players with much-needed opportunities to draw breath and regroup. Even the most intensely loud passages of play transcend the "noise" tag, containing surprising levels of detail provided by three distinctly distinguishable voices. Yes, Borbetomagus is a three-headed beast, but each of those heads thinks and reacts independently and differently. And The Eastcote Studios Session must be a strong contender for their best record in a while.