Yusef Lateef: The Doctor Is In ...And Out 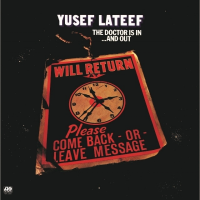 The soul-jazz albums Yusef Lateef recorded for Atlantic between 1967 and 1976, of which The Doctor Is In...And Out is the tenth and final release, may prove to be among his most enduring releases. That suggestion will not chime with the sentiments of many of Lateef's longtime fans, who who dismiss the Atlantics as sell-outs and rate Lateef most highly for the hard bop / modal albums he released on Savoy, Riverside, Prestige and Impulse! before signing with Atlantic. But the fact remains that it is primarily the Atlantics which have been celebrated afresh during the 2010s and for which Lateef has been lionised by a new generation of enthusiasts. The Doctor Is In...And Out is a stonkingly good example of the series.

Lateef's first decade of recording, from 1957 to 1966, was, however, undeniably top ranking. A gutsy tenor saxophonist and soulful flautist, he was an early adopter of modal frameworks, and, beginning in 1957 with his Savoy album Jazz Moods, he was also a pioneer of the use of Middle Eastern and South Asian instruments and harmolodic motifs in jazz. The culturally outward-looking Savoy and Prestige discs, recorded between 1957 and 1961, were well ahead of the curve and Lateef developed the experiments further on Impulse! later in the decade. On the downside, however, the Prestiges often veered uncomfortably close to easy listening. Indeed, the label originally released some of them—including the totemic Eastern Sounds—on its Moodsville and New Jazz subsidiaries, which Prestige founder and producer Bob Weinstock had set up to tap into the wallpaperish "mood music" market, at its peak in the late 1950s and early 1960s.

But while some listeners will question the likely longevity of the Atlantics over Lateef's earlier work, far fewer are likely to suggest that it is for his post-Atlantic oeuvre that he deserves to be best remembered. This is marked by a gradual return to the lightweight mood-music tendencies of the early 1960s. After a spell with CTI, and a relatively undocumented period in the 1980s, Lateef founded his own label, YAL, in 1992. From this point onwards his recordings hold progressively less interest for jazz fans. With a few exceptions, notably outings with Archie Shepp and Von Freeman in the early 1990s, Lateef's many YAL albums find him exploring—or, to put it another way, noodling aimlessly around in—new-age soundscapes. His co-headliner with Ahmad Jamal, Live At The Olympia June 27 2012 (Jazz Village, 2014), which once would have promised so much, is irredeemably bland, despite the presence of Jamal's full-throttle rhythm section.

All Lateef's 1967 -1976 Atlantic albums were made with jazz and R&B producer Joel Dorn, and from 1972 featured Kenny Barron on keyboards and as a contributing composer and arranger. By the time the three men got together to record The Doctor Is In...And Out in 1976, they had the recipe down. Lateef is mostly heard on tenor saxophone and flute, his two strongest instruments. His opener, "The Improvisers," is an outstanding example of ostinato-driven soul-jazz (take a bow bassist Ron Carter or Robert Cunningham or Anthony Jackson). Al Foster on drums and Dom Um Romao on percussion keep everything cooking. A strong horn section adds further interest.

This remastered edition from British audiophile label Pure Pleasure is the album's first vinyl reissue since the original release.

Side One: The Improvisers; Hellbound; Mystique. Side Two: Mississippi Mud; Mushmouth; Technological Homosapien; Street Musicians. In A Little Spanish Town (T’was On A Night Like This).