Brian Landrus Trio: The Deep Below 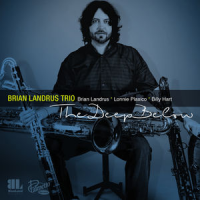 If this recording can't kindle a love of the low end in your cochlea then nothing can. For The Deep Below, Brian Landrus—perhaps the most significant baritone saxophonist/low reed man to emerge in recent times—put together a trio with bassist Lonnie Plaxico and drumming icon Billy Hart. Together, they explore eleven Landrus originals and three classics, most of which manage to mask weighty sounds with lithe movements and, more importantly, lyrical thoughts.

Part of the charm surrounding Landrus' work is built around his ability to make songbirds out of instruments that are often mistakenly seen as nothing more than hulking stabilizers. He conjures thoughts of Harry Carney while Hart and Plaxico occasionally flirt with double time during a gorgeous take on Duke Ellington's immortal "Sophisticated Lady," he brings a noir-ish sensibility to the fore with his bass clarinet work on "Fields Of Zava," and he delivers some spellbinding bass flute work on "Will She Ever Know." Sometimes Hart and Plaxico accentuate the allure in his work, and other times they play against it. "It Comes Together At The End," which finds Landrus beautifully adrift while Plaxico pulls at seams and Hart adds cymbal splashes and swelling rolls, is a strong example of the latter.

While trio interplay is at the heart of this record, Landrus also flies solo on more than one occasion. He paints an intriguing and appealing picture with nothing but his bass clarinet on "Just A Fading Memory" and "Open Water," and he delivers a stream-of-consciousness, sheets-of-sound semi-abstraction on "Giant Steps" that leaves the listener breathless, to say nothing of what it must have done to the performer.

Much of this material seems to exist in a dreamy haze, due in no small part to the nature of the instrumentation, the sensitivity and elegance of the players, dialed-down tempos, and the beauty in the writing. There are pieces that feed on movement—the album-opening "Fly," the aforementioned "Giant Steps," and a mutable swinger called "The Age"—but most of the music is more concerned with atmosphere and tripartite connectivity.

Some of these pieces seem to end a bit too abruptly, immediately breaking spells that have been cast, but it never takes Landrus long to regroup and cast a new one. It's a minor issue on an incredibly strong outing. The Deep Below presents some dead serious musical talent exploring material that's at once heavy and dreamy. That's no easy feat, but these men make it look easy.

Fly; Sophisticated Lady; The Beginning; Fields Of Zava; Giant Steps; Will She Ever Know; It Comes Together At The End; Just A Fading Memory; I'm A Fool To Want You; Orebro Treatment; Ancient; Open Water; The Age; Once Again.