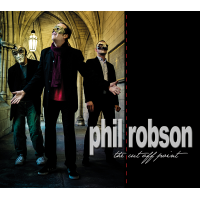 With four albums already to his name and another four by the band Partisans which he co-leads with saxophonist Julian Siegel, British guitar phenomenon Phil Robson hardly needs any introduction, save that his new musical departure is realised by an organ trio offering a smörgåsbord of exciting and imaginative compositions.

Dave Liebman's "Dimi And The Blue Men" has a spacey feel with echoey, oscillating stereo effects to the fore and even some touches of wah wah guitar before a consolidating theme resolves this captivating piece.

"Vintage Vista" is most redolent of the high energy staccato outbursts first heard on the electrifying Tony Williams' Lifetime albums with John McLaughlin and Larry Young and is all the more engaging for that. By contrast "Astral" is a searching ballad where guitar and Hammond weave their respective bluesy solos.

The title track, a more exploratory Lifetime-esque number, sees Robson on fuzz-laden guitar, taking an altogether more daring approach than previous tracks, culminating in a satisfyingly robust ending. "Berlin" is less frenetic and more measured, taken at a mid-to-fast pace with Calderazzo providing a keen rhythmic accompaniment. "Ming The Merciless" the final number, (all are penned by Robson with the exception of the Liebman track) has the guitarist stretching out with a funkier approach and is replete with blues licks and a sudden ending.

Whilst comparisons with Lifetime or John McLaughlin's 1994 album, After the Rain with Joey DeFrancesco and Elvin Jones may seem inevitable, the vast majority of the music here owes little to these groups. Robson is his own man and this trio has successfully achieved what it set out to do, making for a very satisfying album indeed.