By Mark Corroto
September 7, 2009
Sign in to view read count 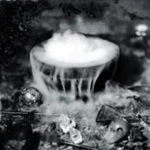 John Zorn is not one to rest on his laurels. It is probably not possible for Zorn to rest, period. With The Crucible, the fourth installment of his Moonchild band, the saxophonist/composer delivers a recording that will be attractive to both hardcore metal and jazz fans.

Twenty years ago Zorn unleashed his band Naked City, its brand of noise/jazz/metal and predilection for musical violence a revelation. He had already shown, in his index card cues, a mix/match, start/stop method of composing; and a love for cartoon, film, and hardcore sounds that took shape in The Big Gundown (Tzadik, re-released 2000) and Spillane (Tzadik, re-released 1999). But it wasn't until Torture Garden (Shimmy Disc, 1989) and the self-titled Naked City (Nonesuch, 1989) that his vision was completely realized.

Naked City hit the senses and caused a protest like Charlie Parker and Dizzy Gillespie's bebop music of the 1940s. Its freakish hard-hitting amalgam of musics were short (songs tended to be less than a minute) sharp shocks.

Zorn moved on to other things. Many other things, including chamber and classical music, film composing, Masada jazz, larger ensemble improvisation, radical Jewish music, and more.

The Crucible adds Zorn himself on his siren alto, and a guest appearance by Marc Ribot on "9 x 9," a Led Zeppelin tribute that rocks out between the now-patented screams of Patton via Yamatsuka Eye.

Certainly the window dressing is the ferocity; between Baron's pulse and Dunn's thunder the direction of this music is quite turbulent. Add to that the Zorn trademark upper register screams and the severity is complete. But that is not the whole story here. The exchanges are crisp and the musicianship (no surprise here) is top rate. The band displays a gentle beauty in the excess that is this music. "Hobgoblin" almost swings as a call-and-response set and the creepy "Maleficia" is a recitation of evil acts that is as scary as a midnight blackout.