By KARL ACKERMANN
October 20, 2016
Sign in to view read count 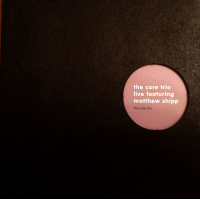 What we have here is no-nonsense free improvisation where the track titles are chronologically functional but the music has a mind of its own. This is the Core Trio, who in direct opposition to that kind of pragmatic naming convention, have consistently performed and recorded as a small combo with an additional guest. Robert Boston, Steve Swell, and Tim Hagans) have each joined the "core" trio being at the heart of a quartet. For the second time, on The Core Trio Live, Featuring Matthew Shipp, they team with the avant-garde pianist, this time capturing a live performance.

The Houston, Texas-based group consists of saxophonist Seth Paynter, bassist Thomas Helton and drummer Joe Hertenstein, the latter being the only member not part of the group originally founded by Helton out of the remains of the quartet Rosta. Paynter has produced a number of adventurous solo albums including Isospin (Self-produced, 2015) with an excellent Taiwanese pianist Hsin-Jung Tsai. Hertenstein has recorded with Thomas Heberer, Jon Irabagon and saxophonist Blaise Siwula. Helton has performed with Hagans, Milt Jackson, William Parker, and Swell among others.

Recorded at a 2014 performance at Houston's Ovations Night Club, the free improvisations of "Before the Break" and "After the Break" are subtly organized, never descending into all-out pandemonium. Each piece clocks in at slightly more than one-half hour, Shipp and Paynter up front in both, instigating bits of melodies and discord, allowing each other to add their individual ideas to the structure. Helton and Hertenstein, judiciously controlling the momentum while allowing the leads to freely explore.

All four players find ample space to cut loose on these two improvisations though Helton appears to function more as the guide and the glue. Shipp has a number of Cecil Taylor moments of thundering chords and torrents of notes, but eventually finds his way back to a more lyrical center. Similarly, Paynter, at times, wails ferociously though longer, melodic lines are his sweet spot. The Core Trio Live, Featuring Matthew Shipp succeeds where much live, free improvisation fails—it is as listenable as it is audacious.

Before the Break; After the Break.

About The Core Trio