Angela Davis: The Art of The Melody 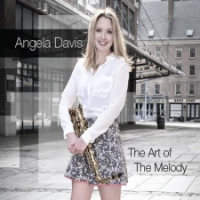 Saxophonist and All About Jazz contributor Angela Davis has made it official, releasing her debut recording, The Art of The Melody. Davis joins a growing legion of female reeds players that includes Sharel Cassity, Alisha Pattillo, Virginia Mayhew, Claire Daly, and Mercedes Figueras, who are flexing their respective chops in the ravenous particles of digital music.

Concentrating on alto saxophone for this recording, Davis immediately channels the dry ice-and-gin tone established in the early 1950s by the young Art Pepper and Paul Desmond. Her tone is even and narrow, uniformly dense throughout its spectrum. Think of a Bombay Sapphire martini, straight up, with an olive; expand that metaphor, and you get the idea. But that is just her tone. Davis' choice of repertoire spans some 300 years, between the Scottish folk song "Annie Laurie" and those originals more recently composed.

Davis crosses jazz styles effortlessly, transitioning from her bebop-oriented "41. St Nick" into an adult contemporary acoustic treatment of Boz Scaggs' "We're All Alone." Her band is as style-pliant as she is, featuring noted bassist Linda May Han Oh, whose own Initial Here (Self Produced, 2013) could not be more different than the present recital. All members take Davis' lead, producing an integrated 1950s-style blowing session in the 21st Century. This music is lean and trim, well conceived from beginning to end. The traditional "Annie Laurie" is given a John Coltrane quartet arrangement, transformed into a modern ballad.

Tom Waits' "Martha" is organic in presentation, Chris Ziemba's churchy piano sweeping along Davis' dry "wounded bird" alto into its melodic flight on this beautiful and neglected song. Yes, Frank Morgan makes his influential appearance in Davis' pedigree. That tone is continued on Chaplin's "Smile," played as a duet between Davis and Oh, a pairing from whom we might want to hear again in the future.

Title: The Art of The Melody | Year Released: 2013 | Record Label: Self Produced