The Amazing Bud Powell: Black Genius, Jazz History, and the Challenge of Bebop 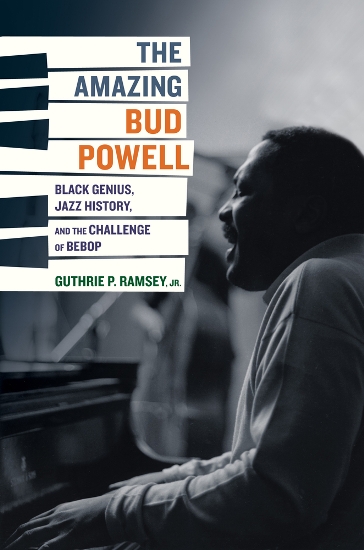 All of the sudden, we have competing biographies of modern jazz pianist Bud Powell. For the longest only Francis Paudras' deeply sentimental memoir, Dance of the Infidels: A Portrait of Bud Powell (Da Capo, 1986) and Bertrand Tavernier's imaginative film adaptation of the same, Round Midnight (Warner Bros., 1986) were the only "biopics" of the biographically-neglected pianist until Alan Groves and Alyn Shipton's light-weight and uninformative Glass Enclosure: The Life of Bud Powell (Bloomsbury, 1993). As important as Powell was to the modern jazz (bebop) movement, precious little academic reportage has been devoted to his tragic life.

Then in the span of two years, two superb Powell biographies surface, each very different and complimentary. The first was Peter Pullman's exhaustively researched ebook, Wail: The Life of Bud Powell (Peter Pullman, LLC, 2012). The second is the present The Amazing Bud Powell: Black Genius, Jazz History, and the Challenge of Bebop (Music of the African Diaspora) written by University of Pennsylvania Music Professor Guthrie P. Ramsey Jr. Unlike Pullman, Ramsey opts for a cultural analysis of Powell, drawing his biographical material from the two previous biographies, especially Glass Enclosure. The book is very much a cultural study using Powell and his life as vehicles for his well-reasoned arguments.

A note to the reader should include mention that this is a very academically-directed book that would be welcome in any college-level African-American Studies class. Ramsey has many asides as he winds his way through Powell's life. However, Ramsey and Pullman both center their reportage on race, Ramsey in the academy and Pullman on the streets. As politically unpopular as it is in this "Post-Racial America" race remains that central, almost fetishist issue, particularly in the American South. Pullman and Ramsey, using their different approaches, tease out the race issue, Pullman, by detail display and Ramsey, by the interpretation of that display. Taken together the two books view Powell's life and accomplishments through tandem prisms, together providing a well-rounded and evenly considered cultural criticism of the 20th Century and beyond.

Ramsey's book is bibliography dense with much sociologic and anthropologic considerations. Where Pullman allowed his detail rich account expose the mistreatment of Powell by his "benefactors" and the "mental health system," Ramsey calls them out point blank, reserving his harshest criticism of Morris Levy and Oscar Goldstein, whose exploitative treatment of Powell predicted the same treatment of one Elvis Presley by his "benefactor" Col. Tom Parker, Presley being of a similar vulnerable population, the chemically dependent (though Powell shared this with Presley, but was further challenged by his unstable mental disease).

Ramsey also attacks Powell's convenient diagnosis of schizophrenia. Doubtless that he suffered from some mental frailty, it should be considered that Powell may have been living in an autism-spectrum zone many years before such a zone was defined. Powell's race and infirmity were used to enslave hem in a manner no different than those African-Americans picking cotton in the Antebellum South. It may be an inconvenient truth, but a truth it remains. Ramsey treats the crushing tragedy of Powell's life with a clinically academic eye, but that in no way reduces the sheer sadness and injustice of the story. Think of an autistic Beethoven, reduced to playing advertising tunes and then allowed to simply fade away through neglect.

In the end, Ramsey's book is less a biography than a study of cultural and musical Black America in the post-wars years as a function of that population segment's reaction to American raceism and its emerging quest for identity. It is a thorough and thought-provoking study that, when taken with Pullman's detailed account, provides an excellent treatment of an important American artist's life and just how little it meant to a majority of people. The Amazing Bud Powell: Black Genius, Jazz History, and the Challenge of Bebop (Music of the African Diaspora) was previously considered by All About Jazz contributor Ian Patterson.