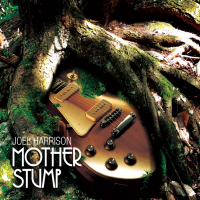 Every so often, musicians feel an inner urge to return to their roots and test their acumen with newer techniques and perspectives. Here, guitarist Joel Harrison revitalizes his early persuasions in a trio format, with keyboardist Glenn Patscha appearing on several tracks. Recognized for his heterogeneous projects, including big band, world-jazz, progressive jazz and distinctive style as a guitarist not content to his rest on his laurels, Mother Stump interconnects another phase of his all-embracing faculties. With dreamy volume control shadings, brazen crunch chords, angular slide guitar riffs, discordant overtones, harrowing electronics treatments and howling blues licks, he mirrors convention with quite a few tricks up his sleeve.

Harrison constructs a slowly developing, deep blues rock groove on "Do You Remember Big Mama Thornton" via whaling extended notes and tersely bending single note lines. It's blues with a feeling, spiced by Patscha who broadens the size and scope amid his husky Hammond B3 phrasings. At times the band sports a chug-along motif, due to the guitarist's coarse fuzz-toned chord clusters, sparking slight remembrances of Cream. The trio stretches out and slams matters into overdrive atop a mid-tempo gait, where the guitarist switches octaves and puts the proverbial pedal to the metal, leading to a hot and nasty closeout. Indeed, the element of surprise is deeply ingrained in Harrison's sprawling musical ideologies.